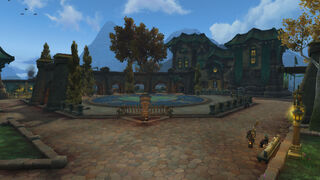 Proudmoore Academy is a Kul Tiran naval academy located in Boralus, sitting just west of Proudmoore Keep. The facility is central to the proud naval tradition of both House Proudmoore and Kul Tiras, overseeing the instruction of its officer class.

The academy is very similar to a typical college campus, with facilities and lecture halls in which a garrison of cadets receive constant training; students slacking off in the basement of the Proudmoore hedge maze, and a hidden harbor full of exotic booze also feature prominently.

Alongside the cadets, the academy is also host to important figures from the Proudmoore military, a large company of Proudmoore marines, and even powerful tidesages. The academy's importance has recently made it a target for the Horde, who have launched several attempts to breach its defenses.[1]

The dark ranger known as Clea infiltrated the city and stroked at the academy grounds during the Fourth War. The Horde agent would only eventually be overcome by the combined efforts of Rear Admiral Hainsworth and champions of the Alliance.[1]

During the Faction Assault on Tiragarde Sound, Horde invaders led by Siege Engineer Krackleboom deployed war machines and other devices against the campus's defenses. Though they briefly occupied much of the grounds, the Horde were eventually confronted by Alliance forces sent to deal with the incursion, and help the academy's residents to prevail.

The grounds of the Proudmoore Academy are attached to those of Proudmoore Keep, and collectively form the southwestern portion of Boralus. The academy opens onto the inner bay of Tiragarde Sound and has docking points along the waterfront. The position the academy occupies is also heavily fortified, complete with bunkers, cannons, and sea walls.

Three halls form the main part of the academy: Erickson Hall, Daelin's Hall, and Harbor Hall. The latter is both the largest and serves as the main lecture hall on campus. To the south, an extensive training course sits along the water's edge, with facilities to test the various naval skills of the cadets. The Admirality Office is also here.