The qiraji are a race of insectoid creatures based in southern Silithus. Different types of qiraji are referred to as castes and it seems to be that every caste has a leader who are under the command of the Twin Emperors: Vek'nilash and Vek'lor. The three most notable castes are the battleguards, led by Battleguard Sartura, gladiators, led by General Rajaxx, and prophets, led by The Prophet Skeram.

Not long after the troll empires divided the insectoid kingdom of the aqir, the aqir split in half, one group going north and the other south; The aqir who traveled north reached the icy land that would become known as Northrend evolved a spider-like shape, founding the kingdom of Azjol-Nerub, and eventually came to be known as nerubians; the aqir that traveled south ransacked and overthrew a titan research station near Uldum and enslaved the tol'vir based there. Converting the research station into an extensive hive, they renamed themselves the qiraji and calling their new home Ahn'Qiraj.[1]

The research station also held a darker secret; it had the secondary purpose of serving as the prison of C'Thun, one of the Old Gods who had reigned over primordial Azeroth before being cast down and imprisoned by the Titans. The arrival of the qiraji turned the station from a prison into a seat of power - as the aqir had worshiped and served the Old Gods, so the qiraji chose to become the servants of C'thun. The qiraji spent the next thousands of years building an army capable of exacting revenge upon the whole of Kalimdor.[2]

A third group of aqir traveled further south to the land that would become known as Pandaria. They became known as the mantid, and fought with the mogu servants of the titanic watchers stationed there. Comments by Kil'ruk the Wind-Reaver suggest that the various descendants of the aqir were aware of each other and ruled much of Kalimdor together prior to the War of the Ancients.

At some point, the qiraji and the sand trolls of the Sandfury tribe were at brutal war. They failed to destroy Zul'Farrak because of Theka who sacrificed himself and took dozens of the insectoid warriors with him cursing them as mindless scarabs.[3]

Only the night elves, who once inhabited Silithus, stood in their way. The War of the Shifting Sands raged for long, agonizing months. The night elves were always on the defensive, always outnumbered, always being driven back. The whole of Silithus was soon engulfed by the silithid and their qiraji hosts. The night elf army was pushed back through Un'Goro, to the borders of the Tanaris desert. Out of desperation, the night elven leader Fandral Staghelm sought the aid of the elusive bronze dragonflight. Their initial refusal to interfere was reversed when the brazen qiraji attacked the Caverns of Time, home and province of Nozdormu, the Timeless One. Nozdormu's heir, Anachronos, agreed to enlist the bronze dragonflight against the marauding qiraji. Every able-bodied night elf joined the cause, and together they forged a campaign to retake Silithus. Even with the might of the dragons backing them, however, the sheer numbers of the qiraji and silithid proved overwhelming. And so Anachronos called upon the progeny of the remaining flights. Even so, it seemed that the numbers of qiraji and silithid were never-ending. So the dragons and Fandral hatched their final, desperate plan: to contain the qiraji within the city, to erect a barrier that would confine them until a more hopeful stratagem could be devised. With the blessing of Elune the barrier was erected before their eyes, rock and stone and roots from beneath the sands emerging to create an impenetrable wall. Even the winged soldiers who attempted to fly over the barrier met with an invisible obstruction that they could not pass. The qiraji who remained outside the wall were quickly slain. The dragon told Fandral that should any mortal ever wish to pass the magical barrier and access the ancient city, they need only strike the scepter against the gong and the gates would open. He then handed the scepter to the arch-druid.[4]

Hoping to contain the threat for all eternity, the arrogant Fandral then broke the scepter, both insulting and angering the bronze dragonflight. His actions that day created a rift between the allies that has existed to this day.[4]

The threat posed by the qiraji has thus remained behind its wall for thousands of years. Recently, however, the unmentionable Old God slowly awakened from his slumber beneath Ahn'Qiraj. Behind the gates of the Scarab Wall, the merciless qiraji stirred once again. Empowered by the Old God, C'Thun, the qiraji prepared their legions for a worldwide assault to avenge their bitter defeat at the hands of the night elves a thousand years ago.[5]

It was discovered that some of the qiraji were finding ways past the wall. Anachronos, the bronze dragon, helped the adventurers of Azeroth open the Scarab Wall to prevent more incursions. There was a lot of preparation both the Horde and the Alliance had to deal with before the gates could be opened. There were two primary branches of this prep work: gathering war supplies and reconstructing the Scepter of Shifting Sands. After Shiromar[4] rang the gong with the Scepter the ancient gates of Ahn'Qiraj opened, revealing the horrors of a forgotten war.[6]

Opening of the Gate

After the Gates of Ahn'Qiraj were shattered, and the qiraji poured forth. The combined forces of the Horde and the Alliance, with High Overlord Varok Saurfang as their Supreme Commander, had to stop the qiraji before they could overrun Silithus and eventually Kalimdor. The qiraji General Rajaxx commanded the opposing forces, and an endless flow of silithid and anubisaths flooded Silithus. This battle stretched across all of Kalimdor, with qiraji resonating crystals summoning the insects.[7] Nonetheless the Might of Kalimdor was victorious. The last of the qiraji forces were defeated, retreating back to the ancient city-fortress of Ahn'Qiraj. The qiraji resonating crystals littering Kalimdor vanish as quickly as they appeared, leaving behind nothing but sundered earth.[8]

Adventurers fought the qiraji and finally reached the chamber of C'Thun. After C'Thun was defeated his remnants were brought to Caelestrasz.[9]

Harbinger Skyriss is one of the qiraji entities that the naaru kept locked up within the Arcatraz. As a servant of the Old Gods, he seeks to usher in his masters' vision of conquering all of the worlds in the universe.[10] He corrupted Warden Mellichar into releasing all the prisoners within the Arcatraz.

During the Elemental Invasion, it is revealed that some qiraji led by Prince Sarsarun still reside in Ahn'Qiraj and some work for Cho'gall due to their joint faith in the Old Gods. Alliance adventurers led by Varian Wrynn or Horde led by Cairne Bloodhoof defeated these qiraji before they could invade Stormwind and Thunder Bluff.

Since the arrival of Deathwing, the qiraji have not been seen. Though contained, they remain a threat.[11]

The qiraji share their progenitor's hatred of non-insectoid life and are utterly inimical to the other races. They hold a particular dislike for the Titans, who like other servants of the Old Gods they consider usurpers, and their servants.

The qiraji and their servants wield items made with the rarest and finest materials: bones from gargantuan ancient creatures, gems from the depths of the earth, metals pure and strong.[12] The most powerful qiraji wield items of such might they'd give pause even to a dragon.[13] The rings worn by the qiraji lieutenants are rumored to grant them formidable abilities. The corrupted gems that adorn them could, in theory, be swapped out with more pure materials to create uncorrupted versions of the rings.[14]

It seems that female qiraji must constantly keep their face covered.

Each of the silithid hives in Silithus has a crystalline prism in it. They are apparently a means for the qiraji to communicate various messages and orders to the silithid.[15] 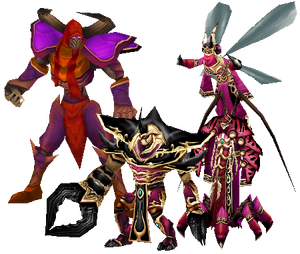 Qiraji gladiators are walking, male qiraji warriors with pincer-like claws led by General Rajaxx. They have human-like feet, and some of their carapace seems to be armor. They are the most common type of qiraji. They are apparently the male counterpart to the qiraji battleguards, but how qiraji actually reproduce is unknown.

Qiraji battleguards (possibly also known as swarmguards) are flying, feminine qiraji warriors with huge insectoid eyes alongside their humanoid ones, and long scythe-like claws hidden under their sleeves. They are very fast and agile, but also less armored than other types of qiraji. It seems to be that the battleguards must constantly keep their face covered. They are apparently the female counterpart to the qiraji gladiators, but how qiraji actually reproduce is unknown. It is also unknown where their clothing ends and their carapace begins, though their shoulder guards do detach upon death.

Qiraji prophets are a type of eight-legged qiraji spellcaster who command powerful mental abilities, often able to take control of their enemies' minds and turn them against each other. Veiled by a robe, qiraji prophets have eight visible legs and three elytra used as shoulder guards and a back-plate. They have long antennae and covered faces. Their robes feature sleeves, which is odd because they have no apparent arms in them. Their breastplate also seems to be the lower half of their head, or at least hangs from under it, and features what seems to be their arms and pincers.

Qiraji emperors are a type of qiraji who command powerful psionic abilities, feeding off other nearby emperors' powers to fuel their own.