“... an entire land where magic is so much a part of the culture. Not just a part of the city, or confined to a handful of elite, educated magi. Magic is the birthright of every citizen. We are all embraced by the Sunwell.”

Quel'Thalas [ˈkwɛlθɑˌlɑːs] (Thalassian for "High Home")[2] (sometimes spelled as Quel'thalas)[3] is a forested area in northern Lordaeron. It is ruled by the blood elves, descendants of the kingdom's Highborne founders, and is known as the Land of Eternal Spring.[4] Its capital is Silvermoon City.

Following their exile from Darnassian society and their abandonment of the Tirisfal Glades, the Highborne under the leadership of Dath'Remar Sunstrider founded the kingdom of Quel'Thalas to the north, within which they reinvented themselves as the high elves. Soon, Quel'Thalas became a shining monument to high elven prowess; the land was magically bathed in an eternal springtime, and Dath'Remar created the Sunwell, his people's own version of the Well of Eternity, which empowered the citizens of Quel'Thalas from then onwards. The elves earned the enmity of the forest trolls of Zul'Aman, under the Amani Empire, who viewed the elves as usurpers. After several long-spanning conflicts, King Anasterian Sunstrider presided over the Troll Wars, which dealt the Amani a defeat they would never truly recover from. In its seclusion, Quel'Thalas continued to prosper with the protection of the Sunwell (even rendering the invasion of the Amani remnants and their Old Horde allies fruitless), until the kingdom's formidable defenses were bypassed by the treacherous scion of Lordaeron, Prince Arthas Menethil, and his undead Scourge.[5]

During the Scourge invasion of Quel'Thalas, the high elves were nearly scoured from Azeroth: the king perished before Arthas's dark powers, the Sunwell was destroyed, and the bulk of their people were slaughtered. In the wake of this devastation, the king's son Prince Kael'thas Sunstrider proclaimed the surviving high elves reborn from the ashes of their shattered kingdom and people, as the blood elves.[6] The blood elves worked tirelessly to reclaim their homeland from the lingering undead, and would eventually succeed in taking back much of their country, the capital of Silvermoon included. In a dramatic turn of events, a twisted Prince Kael'thas returned to beauteous Quel'Thalas and attempted to summon the Burning Legion via the Sunwell. The prince's dark ambitions were not to be realized, however, and the Sunwell itself would ultimately be returned to the blood elves by the Prophet Velen. With the Sunwell restored, a bright future now lies ahead for Quel'Thalas.[6]

The kingdom of Quel'Thalas is currently led by its regent, Lor'themar Theron, following the fall of the royal family. It serves as the starting location for the Horde-aligned blood elves in the The Burning Crusade expansion, and consists of three zones: Eversong Woods, the Ghostlands, and the Isle of Quel'Danas.

In-game collage of the maps of Quel'Thalas.

Location of Quel'Thalas in the Old World, swimming from Hinterlands.

There is also a zone of the "old world" officially named Quel'thalas. It was the only glimpse of Quel'Thalas before the Burning Crusade expansion, and was accessible in the game. See Northern Lordaeron and this subpage for more information and speculation about the zone. Adon the high elf hinted that the zone was to be added in a later add-on.

Prior to Patch 4.0.3, you could reach it by swimming along the coast from Tirisfal Glades east; or north from the Hinterlands beyond the coast of the Eastern Plaguelands.

Located near the peninsula of the unnamed zone is a tall white tower that is currently inaccessible that has a dock nearby.

Following the Cataclysm expansion and the ability to fly in Azeroth, invisible walls prevented conventional access to the "old" Quel'Thalas. With Battle for Azeroth, the walls were removed.

Quel'Thalas was opened in World of Warcraft: The Burning Crusade, and is split into three main regions. To the north is the Isle of Quel'Danas, home to the dragonhawks and location of the mystical Sunwell. South of Quel'Danas, across a channel of the North Sea, is Eversong Woods, the blood elf starting zone and the location of their capital, Silvermoon City. To the south of Eversong, across the Elrendar River, is the Ghostlands. It is here that the primary base of the Scourge in Quel'Thalas, the fortress of Deatholme, is located - as is the city of Zul'Aman, the capital of Quel'Thalas' long-hated enemies, the Amani forest trolls.

All of Quel'Thalas is bisected by a path of Blight known as the Dead Scar. This was the path taken by Arthas from Lordaeron to the Sunwell in his quest to resurrect Kel'Thuzad, running from Deatholme all the way through the Ghostlands and Eversong Woods, coming to a stop midway through Quel'Danas at the gates of the Sunwell Plateau. The path is patrolled by remnants of the Scourge invasion of Quel'Thalas. All attempts by blood elf magisters to cure the blighted soil have failed, giving the blood elves more of an incentive to seek out the destiny promised them beyond the Dark Portal.

Quel'Thalas is connected to the old world via the Thalassian Pass in southern Ghostlands, which goes along the main road (blocked by debris prior to Burning Crusade) into Lordaeron, in the region now called the Eastern Plaguelands. The path between Ghostlands and EPL is separated by an instance portal; the areas in which the "instance" falls under are all three regions of Quel'Thalas, both islands of the Azuremyst Isles (where the draenei start out) and all of Outland.

Players will briefly visit the Sunwell during the quest to restore Quel'Delar. 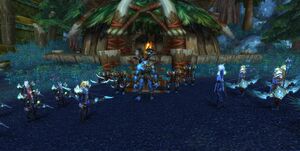 Halduron, Vol'jin, Vereesa and Lor'themar's courier meet on the outskirts of Zul'Aman.

While most of the rest of Azeroth has been updated and moved forward in the timeline to just after the Cataclysm, Quel'Thalas remains as it was in The Burning Crusade expansion. Specifically, the Scourge shows no abatement as a result of Arthas' defeat; while the large, green crystals filled with fel energy, said to have been removed at this point in the timeline,[7] still dot the landscape in Eversong Woods and Silvermoon City. In the lore timeline, the blood elves should be using the now-restored Sunwell for power (although, their fel-green eyes will take a long time to wear off)[8] while the Scourge still has a presence in Ghostlands by the time of Invasion of Pandaria as encountered by Sylvanas Windrunner during the trial of Garrosh Hellscream.[9] Additionally, the Isle of Quel'Danas should now be free of Scourge, Burning Legion, and Kael's forces; this progress can only be glimpsed during the questline for Quel'Delar in a phased version of the isle. It is unknown whether Quel'Thalas will be updated to the present time, and if so, when.

Discounting standard city updates (the addition of new class trainers and some updated Blood Knight quest text), the battle against the revitalized troll empire brewing in Zul'Aman marks the first major change to Quel'Thalas post-The Burning Crusade, as the Quel'Delar segment is phased for its entirety.

The Horde sent a massive force to march on Arathi and take Stromgarde in order to use it as a launching point for Gilneas.[10] The Alliance in return sent their armies to protect the Stromic lands and continue their conquest of the Eastern Kingdoms, by cutting off the north, especially Silvermoon City.[11]

From "World of Warcraft: The Burning Crusade" in Computer Gaming World, December, 2005 by Jeff Green:

The blood elf starting area is Sunstrider Isle -- many thought the Scourge has destroyed most of their land, this is still a vital, healthy area -- as you can see from the screens. "We wanted a look that was the opposite of the night elf look," says Metzen, "Where the night elves live in eternal twilight, we wanted the high elves, at their best, to live in a place of eternal spring and vibrancy. Arthas has destroyed most of it, but some of it still lives on." Blizzard also wanted a different architectural vibe for the blood elves' land. "The night elves have a somewhat Nordic and Japanese architecture," says Metzen. "We wanted something more classical and magical this time."

At this point Quel'Thalas is set to be composed of roughly three to five zones, including Eversong Forest, the starting zone (and also the location of the blood elf capital, Silvermoon City), the Ghostlands, which border the Eastern Plaguelands to the south, and the Sunwell Plateau, which won't be part of the initial expansion but will be a part of a live update down the line. Blizzard is also adding a high-level instanced area, Zul'Aman, home of the forest trolls, as incentive for players to take their old characters up into this new land.

One key goal for Blizzard was to make sure that, for this new Horde race, there was enough variety in the zones to keep things interesting. "We wanted to mix things up more this time," says Rob Pardo, VP of game design, "We learned from Kalimdor that there was just too much of the same thing--too much desert, too much bleakness."

One particularly distinctive feature of this area will be that Metzen jokingly calls the "Road o' Death," the trail that Arthas' army marched through in WarCraft III, which completely bisects the land all the way through, including Silvermoon City. "It's a constant reminder to the blood elves," says Metzen, "of just how much shit these guys have gone through."

In Lands of Conflict, Quel'Thalas is a burned and dead land that has been dubbed Blackened Woods.[12]

The power of the Sunwell - manifesting in a massive arcane shield known as Ban'dinoriel - was once used as a great defensive measure to protect Silvermoon City. It was considered to be impenetrable. During the Second War, it was enough to ward off an onslaught of enslaved red dragons, and during the Third War it halted the Scourge army's advance until the invaders, using knowledge gleaned from a traitor, were able to dispel it. With the Sunwell restored, it is unclear if it still holds these considerable powers of protection. Though the mooncrystals required to passively empower this shield are now gone, it was stated that the magi could erect Ban'dinoriel in their place.[4]