For the unit, see Quillboar Brute. 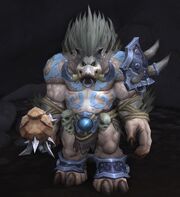 Bramblefist the Maddened was an ettin that had undergone the same ritual that the Briarback quilboar brutes did, making him even angrier.[1]

Brutes are closer in size to the tauren model, with whom it shares an animation skeleton. Brutes have spines running along their wrists and vine-like bristles extending from their back. Brutes have long straight tails in contrast to the short curled tail seen in other quilboar.