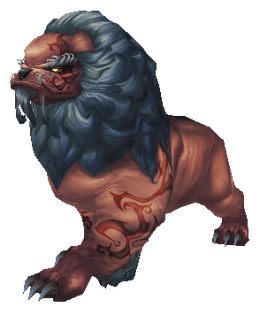 Quilen (pronounced "kwai-lin")[1] are canine-leonine creatures that are native to Pandaria and serve as the favorite companions of the mogu. Mogu sorcerers create them by breathing life into stone using an ancient, secret magic.[2] Loyal and fearless,[3] these stone hounds know no mercy and can be quite skilled at blending into their surroundings. The mogu use them as guard dogs,[4] in war,[5] and to track their enemies.[6] There are three variations of quilen: organic, stone, and adorned stone.

During the brief reign of Emperor Kang, the mogu experimented with binding quilen servants in small stone statuettes. The experiment was abandoned as the quilen thus bound were greatly diminished in power and therefore deemed unworthy.[7]

Quilen are tamable by hunters as part of the stone hound family. The family was originally named "quilen", but was renamed and expanded to include gargons in patch 9.0.1.