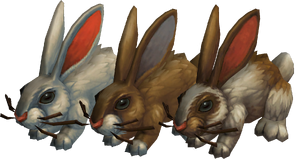 A rabbit is a small, fluffy critter that can be found in almost all grassy or forested areas of Azeroth. It is a favorite target of predators.

The squashed carcasses of these unfortunate animals are often found within the folds of the skin of various thunder lizards around Durotar.[citation needed]

When you have two rabbits, you'll often soon have three.[1] Spring rabbits symbolize fertility, and they love to demonstrate why.[2] Despite their idyllic surroundings, grasslands cottontails hop at surprising speed when evading their pursuers.[3] Mountain cottontails can leap up a steep incline with speed you would not believe.[4] The elfin rabbits' proximity to the magic of the elves has caused some of them unnatural long life. And in some elfin rabbits... stranger things.[5]

The following battle pets share the same model as rabbits, even though they are not rabbits themselves: