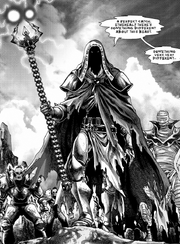 Ragnok Bloodreaver is one of the original death knights of the Horde of Draenor, created by Gul'dan from the corpses of fallen Alliance knights and the spirits of the slain Shadow Council.

Ragnok was an orcish warlock of the Shadow Council when the new warchief, Orgrim Doomhammer, came upon them in a surprise attack and slew nearly every last member, including him. Shortly after, Ragnok's former master, Gul'dan, brought the orc back and placed his spirit, along with those of his fellow council members, in the decaying bodies of the Knights of Azeroth. Thus the death knights were born.

Ultimately, the Horde was defeated and the Dark Portal destroyed. Ragnok found himself trapped on Draenor along with Teron Gorefiend and Gaz Soulripper. Teron, accompanied by the other death knights, convinced Ner'zhul to reopen the portal.

Ragnok was assigned to accompany Tagar Spinebreaker and Fenris Wolfbrother on their quest to retrieve the Jeweled Scepter of Sargeras. They overcame the Kul Tiran navy with the help of black dragons, and arrived at the Broken Isles with ships stolen from Menethil Harbor.

Once inside the Tomb of Sargeras, Ragnok's magic guided the way towards the scepter. They found the scepter, but it was in the hands of a demon, one of the tomb's guardians. The demon was slain in battle, and the scepter recovered. When Fenris commanded the company to leave, Ragnok lashed out angrily. He had sensed the Eye of Sargeras nearby, and said that it would be foolish to abandon the chance to claim an artifact of such great power; an artifact that Gul'dan had come to claim himself. Yet, Fenris was adamant. Ragnok threatened him with death, but did not avert Fenris' choice, and resigned himself to his duty. With the Scepter of Sargeras, Ragnok, Fenris, and Tagar returned to Ner'zhul to continue their duty to the Horde on the front lines.[1]

When Ner'zhul fled through a portal to escape the destruction of Draenor, Ragnok did not follow him and became trapped in Outland as a result. Twenty years later, he sought to overthrow Illidan Stormrage and become the new Lord of Outland and, eventually, Azeroth. To these ends, Ragnok united a band of fel orcs under his strict rule and bargained with Kadavan, an ethereal mercenary, in order to gain his help with enslaving nether drakes and dragons to bolster his forces.[2]

Eventually, he managed to defeat his rivals, the Dragonmaw clan, and took their surviving warriors and nether dragons to strengthen his army. With them, he set out to conquer the Dark Portal. His machinations were foiled by Jorad Mace and a combined Alliance, Horde, Silver Hand, Aldor, and Broken army; who defeated his forces at the Stair of Destiny. Ultimately, Jorad Mace destroyed Ragnok's device which controlled his nether dragons and called on the Light to judge Ragnok, blasting apart his chest with a radiant swing of his hammer and sending his disintegrating body tumbling from the back of his nether dragon mount.[3]