Raid difficulty determines the difficulty of the encounters and is controlled by the raid leader. A variety of options are available depending on the raid and when it was released. These can be separated into three main periods: Fixed size, until 3.2; 10 man heroic, until Mists; and post-Draenor, the current system. In the past, raid difficulty was often associated with raid size and the quality of the loot involved.

There are four types of raid: Flexible Raid Finder, Flexible Normal, Flexible Heroic, and 20-person Mythic. The three flexible raid sizes can accommodate raid groups from 10-25 people; Mythic is the only difficulty requiring a fixed size of the group. These difficulties are present in raids from Warlords of Draenor, Legion and Battle for Azeroth. Each type of difficulty comes with its own quality of loot. 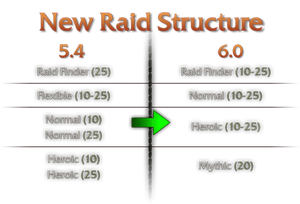 Warlords of Draenor removed the Flexible mode, 10-player normal, 10-player heroic, 25-player normal, and 25-player heroic, bringing the six-tier levels into the current four (including the added Mythic mode). Essentially 10-player and 25-player were being merged back into single normal mode which auto-tunes itself between 10-25 players in the way Flexible raids did. The same applies to the heroic versions and even the Raid Finder. Mythic mode is the newly designed raid tier designed to be a 20-player mode for those that want an absolute challenge.

Legacy raids are available in four sizes: 10 man, 10 man heroic, 25 man, and 25 man heroic. These reflect the changes made in 3.2 during Wrath of the Lich King to enable more flexibility over the fixed raid sizes in the original game and The Burning Crusade.

Until Wrath of the Lich King, most raids did not have variable difficulty or other settings, and raids had a fixed size. In Vanilla, different raid instances had different sizes: the four most famous of which held 40 raiders. However, Upper Blackrock Spire had 10 people, while Zul'Gurub and Ruins of Ahn'Qiraj had 20. Similarly most of the raids in The Burning Crusade had 25 people, with the exception of Karazhan and Zul'Aman, which had 10. The smaller size raids were sometimes considered to be easier, due to their lesser requirements and lower gear requirements.

Fixed raids would start to change with Wrath, and the raid leader could change the difficulty of the encounters in a dungeon as a new setting. Each raid was designed to be fought in both 10 and 25 man raid sizes and each size of raid was originally considered a different difficulty as the bosses had more health, stats, and dropped better loot. All Burning Crusade and original Wrath raids introduced before patch 3.2.0 were considered to use 10-player mode for the former normal mode (10 man raids) or 25-player mode for the the former heroic mode (25 man raids), and this size setting was controlled by the Dungeon difficulty setting. It was originally considered that this setting also determined whether a raid was on normal mode (10 man raid) or on heroic mode (25 man raid). This definition can be shown in certain quests from the time, such as

[30R] Heroic: Archivum Data Disc. This usage is not to be confused with elite mode events /actions within the same raids, which were available earlier in Ulduar (patch 3.1). Algalon is an elite boss but can still be fought on 10 man, resulting in

3.2 and Introduction of 10 Man Heroic

At the time of the formal introduction of raid difficulties, all newer raids beginning with the Crusaders' Coliseum can use the 10-player heroic mode and 25-player heroic mode settings to access harder versions of the raids, However, each of the four combinations of raid size and difficulty dropped a different quality of loot.

Note: If a heroic raid mode is selected, the previous raids which did not use this new feature will still be launched in the selected size (10 or 25-man).

Patch 3.3.0 brought new changes to dungeon difficulty settings, allowing them to be changed for each boss in the raid if desired. Therefore a combination of normal and heroic encounters could be fought.

In the upcoming patch we are adding a new feature to the Icecrown raid instance that allows the raid leader to change the instance's difficulty setting on a boss per boss basis. The way the raid leader chooses to switch is the same as now, by right-clicking on the character portrait. The difficulty settings can be changed from inside Icecrown Citadel, with some restrictions. For example, you cannot change the difficulty in combat or during certain events specified by our design team. To enable the ability to change the raid difficulty to heroic, you must first defeat the Lich King on normal mode, as doing so unlocks the heroic version of this raid instance. There is no heroic version of trash; meaning changing the difficulty will only affect boss difficulty.

We chose this particular functionality because we didn't want to use the Trial of the Crusader method, and have four versions on a raid of this size. We felt the Ulduar method of having to know a certain trick to do on the boss was difficult to communicate and tied too heavily to achievements. We might eventually convert Trial of the Crusader over to this new system but Ulduar and Naxxramas will likely never change.[1]

In Cataclysm and Mists of Pandaria, loot would be standardized between raid sizes; 10-man Heroic and 25-man Heroic gear would be of equal quality. A third raid difficulty, Raid Finder would be introduced with its own lower quality of loot below 10-man Normal, starting in Dragon Soul and continuing through Mists of Pandaria. Finally, in Siege of Orgrimmar the first flexible system was introduced in between Raid Finder and normal mode, paving the way for Warlords of Draenor and the modern system. As above, this system is still used for "Legacy raid difficulty".