Ralaar Fangfire, also known as Alpha Prime, was the first worgen. A talented night elf druid who was able to surpass others in practicing the art of the pack form, he came to find a group known as the Druids of the Pack and became their leader. His attempts at mastering the Pack Form led to the creation of the Scythe of Elune, the worgen and the Druids of the Scythe. Although he still retained his consciousness and intelligence, unlike Gilnean worgen, he showed no sign of being able to revert back to his night elf form (but from what is shown of his attitude, it was unlikely that he would have wanted to anyway). Millennia later, he formed the Wolf Cult in Gilneas, a sinister organization that sought the Scythe of Elune. 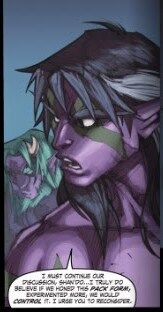 War of the Satyr

Some time after the Great Sundering, Ralaar fought alongside his best friend Arvell,[2] Belysra Starbreeze and other night elves against the satyrs in Ashenvale, during the War of the Satyr. Due to heavy losses to their number, Ralaar argued with Malfurion Stormrage over the use of the Pack Form, which he felt would give them the strength to end the war.

However, the argument turned into hate when Arvell, having promised to Malfurion to never use the Pack Form again after losing control and killing some Sentinels, was murdered by satyrs, unable to defend himself without the Pack Form. Belysra, Arvell's lover, was devastated by his death.

Druids of the Scythe

Alpha Prime as the leader of the Wolf Cult.

At some point, the Druids of the Pack fell to the feral rage of the Pack Form. Ralaar was the only druid who still retained his sanity when he used the Pack Form, and after besting the pack in combat, Ralaar offered to show them a way to keep their sanity whilst in the pack form. He has thus established himself as the leader of the druids and has taken on the name of Alpha Prime.[3] With the help of the embittered Belysra, the two constructed the Scythe of Elune. With its power, the druids hoped to master the pack form.

Yet instead of mastering the Pack Form, the Druids of the Scythe were transformed into the worgen. The worgen were mad and considered their transformation the "purest" embodiment of nature. When the worgen battled the satyrs, they tore through friend and foe alike and spread their curse to other night elves. Malfurion Stormrage, seeing no other choice in containing the worgen threat, used the Scythe of Elune to banish the worgen to the Emerald Dream, where they would rest for all eternity.

Ten thousand years later, Archmage Arugal under the orders of Genn Greymane summoned the "wolf-men" from the Emerald Dream to Azeroth, Alpha Prime being among them, to fight the approaching Scourge.[4] In Gilneas he recruited Arugal and used him to spread the worgen curse to the humans of Silverpine Forest.[5] Eventually he started a Wolf Cult, whose code he wrote down in the Purity of Essence, in Gilneas that was meant to spread the curse and made his followers murder innocent people as an initiation rite (these murders were known as the Starlight Slasher murders). The cult's goals were to locate the Scythe of Elune.

When the worgen curse afflicted Gilneas, Alpha Prime purposely afflicted Halford Ramsey with the worgen curse to stop him from discovering about the Starlight Slasher murders and the planned worgen attack on Gilneas City, as well as his true intentions.

It was later revealed that Alpha Prime had infiltrated Gilneas using tunnels hidden underneath the Greymane Wall. His purpose was to get the Scythe of Elune, which he planned to use to free the rest of the worgen banished in the Emerald Dream. With the Scythe of Elune bolstering his army's ranks, he planned to later attack Darnassus and exact revenge on Malfurion Stormrage. To these ends, he allied himself with the Forsaken and used the worgen attack on Gilneas City to weaken the nation's defenses for the Forsaken invasion.

When the Wolf Cult attacked Gilneas City, Alpha Prime was confronted by Belysra in the midst of the chaos, after Greymane Court had fallen but before the Merchant Square did. He revealed to Belysra his intents for revenge on Malfurion, claiming that Malfurion preached a code of ethics that were conveniently forgotten when they stopped suiting his purpose, and that duplicity runs in the family. Belysra countered that Malfurion had confided in her that he agonized over the decision he had to make all those years ago, as well as guilt for Arvell. Perhaps most importantly, she revealed to Ralaar that Malfurion had also used the pack form before, and gone into a frenzy himself until Cenarius briefly locked him under Daral'nir. This statement, however, caused Alpha Prime to declare Malfurion not only a fool but also the ultimate hypocrite. The battle between the two of them lasted until about the time of Darius Crowley's final stand in the Cathedral Quarter, at which point Belysra was saved when Halford attacked Alpha Prime, and Belysra used the light of Elune to send him into one of the city's canals, giving them time to escape. 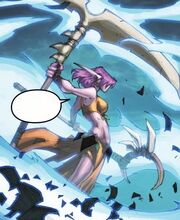 Though the Forsaken discovered the whereabouts of the scythe, unbeknown to Alpha Prime, their machinations were foiled by the worgen player when the scythe was retaken and returned to priestess Belysra.[6] Believing that the Gilneans and priestess Belysra's night elves no longer wielded the scythe, Alpha Prime led the Wolf Cult to attack Belysra's forces at Tal'doren. To his surprise, Belysra unveiled the Scythe of Elune and tried to use the scythe to banish Alpha Prime's worgen back to the Emerald Dream. Before Belysra could complete the spell, she was shot in the arm by a Forsaken dark ranger. With Belysra dropping the scythe, Alpha Prime then had his Forsaken allies surround Belysra and her Gilnean allies. Alpha Prime took the scythe and was about to finish Belysra with it, but he was ripped to shreds by a spirit wolf who turned out to be the ghost of Arvell.[4]