For the mob in Wetlands and Loch Modan, see Ram (mob). 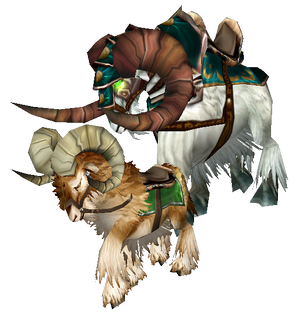 The ram is a rugged, horned beast and the racial mount for dwarves. Wild rams roam Loch Modan, Dun Algaz, many areas of Northrend, Stonetalon Mountains and Bastion.

Distinguished by their shaggy coats and massive horns, Barak Tor'ol mountain rams are simple yet proud animals whose fearlessness is matched only by that of their dwarven masters. While these good-natured animals lack ferocity, they compensate with uncommon durability and strength. The thickness of their fur helps them withstand the biting winds of Khaz Modan and the sharp claws of the mountain beasts that populate the region.[1] The dwarves value them for their fearlessness charging into battle.[2] Their thick bony skulls and massive horns make them the ideal mounts for charging through groups of armored enemies.[3]

Male rams will often smash their thick skulls against each other for hours to impress a female. In that way, they're very similar to dwarves.[4] The

[Ironforge Ram] breed was the first species of ram to be domesticated by the dwarves when they arrived in Dun Morogh, according to the Wildhammer Fact Checker.[5] The

The Stormpike clan's mount trainers have a tradition of etching their names onto the left horn of every battle ram they raise.[7]

Brewfest is known for its ram mounts. Brewers retired the

[Brewfest Ram] from active advertising service after complaints that the beasts were "too temperamental" to control in major cities.[8] Dwarves attribute the

[Swift Brewfest Ram] breed's even temperament to rigorous training, but other races argue that a daily diet of strong ale has something to do with it.[9]

During thunderstorms, rams will hide behind anything larger than themselves.[10]

Rams are tamable by hunters as part of the gruffhorn family.

When confronted by such an intimidating set of massive horns, it’s hard to remember that this animal is just a male sheep. Wild, but not necessarily aggressive, it wanders through the snowy hills, likely in search of food. Battle rams are the sturdy rams raised by the dwarves as mounts, especially in the Alterac Mountains. They serve in essentially the same role that warhorses do for humans; but the dwarves tend to both train and equip their mounts better, and the rams are considerably more resilient overall. Recently, the dwarves have begun training their strongest allies (usually humans) in how to properly raise and ride a battle ram, knowing that such a skill would benefit any member of the Alliance.

A wild battle ram avoids combat. If pressed, it charges its attacker, using its horns and hooves to subdue its target as quickly as possible. Battle rams are fiercely loyal and fight to protect their riders. A charging battle ram deals double damage on a gore attack with its horns.[11]

Despite their docile appearance, the Battle Rams of Alterac are among the hardiest and fearless mounts in existence.[12]