“Raptors are as loyal as they are vicious. If you ain't friend, you are food.”

Raptors are a type of predatory dinosaurs and one of the most iconic beasts of the Warcraft universe. They can be found both in Azeroth and Outland, as well as Draenor.

They are superb hunting beasts that can track prey over great distances and are often lethal to encounter when caught unawares.[2] They hunt in packs.[3]

[Savage Raptor] in the TCG.

“They are lethal at eight months, very lethal.” 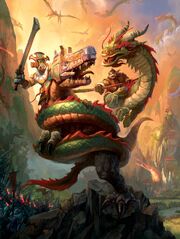 A Zandalari troll on a raptor fighting a pandaren on a cloud serpent during the Zandalari Troll Wars.

Raptors are large, aggressive theropods (this means, they stand upright on two large hind legs in a bird-like fashion). Raptors are found in Arathi Highlands, the Barrens, Blade's Edge Mountains, Durotar, Dustwallow Marsh, Gorgrond, Lost Isles Nazmir, Stranglethorn Vale, Un'Goro Crater, Vol'dun, Wailing Caverns, Wetlands, Zuldazar and Zul'Drak. Raptors seem to be very intelligent for beasts.[5] They wear feathers and beads, and in the Barrens (where the smartest raptors are said to dwell) they have a settlement of mud huts decorated with bone ornaments called Raptor Grounds. Evidently, raptor hatchlings can be so vicious as to eviscerate an entire adult cow in less than ten seconds.[6] Raptors make for good eating if one doesn't mind gamey meat.[7]

The raptors of Raptor Ridge once joined forces with Rhonin in the struggle against Sintharia at Grim Batol.

Among the Explorers' League, there are those who believe that birds are descended from dinosaurs such as an extinct type of raptor that had feathered arms. The feathers suggest some kind of missing link between the two different kinds of animals.[8]

Legends tell of a spell placed upon a hunting raptor who dared to snarl at young Tyrande Whisperwind as she bathed in a jungle pool. The beast is cursed to wander Azeroth - until it apologizes.[9]

During the War Against the Nightmare, of the animal portion of the dreamform army, many were in part herded by the more sentient, reptilian raptors.[10] 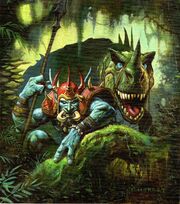 A jungle troll and his raptor.

“When ya fight alongside raptors, ya want a mount dey can't eat.”

Longtime allies of the trolls, these jungle hunters form a special bond with their masters. They become steed, guardian, and friend.[12] Speed, cunning and ferocity are the things trolls and raptors admire about each other.[13] They have spread to nearly all of the lands of Azeroth. It is uncertain whether the trolls led them or followed them.[14] The first tamer of raptors was King Dazar, founder of the Zandalari Empire.[15]

Since the dawn of the trolls they have hunted with raptors and used a variety of raptors as mounts. A troll and his raptor are more than just friendship — it is a bond of blood, as both of them need each other. Usually it takes many years to form this kind of bond.[16] A beast caller with a good sturdy raptor commands a lot of respect. Raptors take naturally to the spirits due to their high intelligence.[17]

The savage ferocity of Kalimdor's raptors has enthralled the Darkspear trolls since their arrival. They consider a raptor to be the truest form of a hunter, and as such, the tamed

[Darkspear Raptor] is their mount of choice. A tamed raptor is truly a fearsome beast, as a skilled troll is able to channel the reptilian steed's savagery to suit the rider's will. A tamed raptor is also one of the most auspicious signs of status amongst the trolls; many have died trying to tame these swift and deadly hunter beasts, and to possess one indicates great station.[18] The Darkspear raptor was originally bred by the Drakkari, but has since been cultivated by the Darkspear tribe in Northrend.[19]

Compies are a type of small, raptor-like creatures that are considered vermin by the Zandalari trolls.

Gonk is a raptor loa. He is the one who taught the Darkspear tribe how to be druids.

Razzashi raptors are among the cleverest predators in the jungle, making them favored by the Gurubashi trolls.[20] The only known Razzashi Raptors were said to have been in the custody of Bloodlord Mandokir in Zul'Gurub. This species of raptor has not been seen in many years.[21] The purebred royal raptors of Zul'Gurub, these mounts have become a rare sight in Stranglethorn Vale. The Gurubashi have been known to fly into a rage at the sight of any non-troll riding one of their precious beasts.[22]

The black war raptor is bred from the same vicious line that sired Ohgan and brought victory to the Gurubashi Empire.[23]

A riding raptor in the TCG.

In World of Warcraft: The Burning Crusade, Outland is inhabited by another type of raptor found in the Netherstorm and Blade's Edge Mountains. Their coloration and body shape is quite different from the raptors of Azeroth, as they feature very bright coloration, glowing eyes, and sharp spikes ridging their spine and tail.

In Warlords of Draenor, set before Draenor's destruction, the uncorrupted raptors resemble Azeroth's. 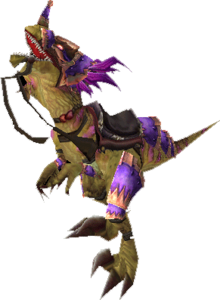 Raptor are sold by Zjolnir located in south durotar by Sen'jin Village. Samamba the Sen'jin Quartermaster in Icecrown also sells two unique Raptors. There are also several rare raptors all over Azeroth.

Raptors come in many colors, from green-striped red to yellow-striped turquoise. A raptor’s tail extends straight out, held aloft by an intricate structure of bony supports, thus allowing its weight to be carried entirely by the back legs. Raptors weigh about 600 pounds and use a combination of speed, grasping forearms, large teeth, and hind legs with ripping talons. They hunt by running at prey, leaping, and ripping with their rear talons as they claw and bite. A raptor has a relatively large brain for a dinosaur, and its pack hunts with cunning tactics.[24]

[Strength of the Pack].