As the highest-level form of battleground play in the game, rated battlegrounds typically see fierce competition between highly organized teams, with personal and team ranking at stake. Rated battlegrounds feature tighter restrictions on items and abilities, as with Arena play. All included battlegrounds are also scaled to 10v10, changing the pace of some battles.

Rated battlegrounds offer substantial rewards in the form of

[Conquest Points], and are a decent option for earning new gear. However, the consequences for ratings are perhaps a more important motivation for success in these battles, providing not only personal glory but also a shot at rating-restricted titles, mounts and achievements. As with arena, the top rated teams in each region can be viewed on the official site.

While broadly similar to regular battlegrounds, rated battlegrounds tend to feature far more organized play, with teams customized to provide the ideal combination of classes and roles. Players are usually in voice communication, and may have prearranged tactics and plays in mind. For a general discussion of battlegrounds, see battleground.

Rated battlegrounds can be queued for in the Rated pane of the PvP interface. This can only be done by the leader of a party with a sufficient number of members.

All rated battlegrounds are 10v10 battles.

These features were canceled or removed as the Rated Battleground concept evolved on Beta & Live. 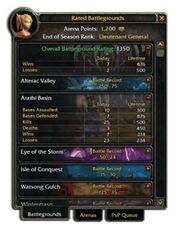 Early concept for the battleground overview as shown on BlizzCon