For the pre-Mists of Pandaria encounter, see Rattlegore (Classic).
Not to be confused with Rattlebore. 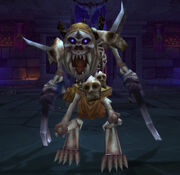 Rattlegore is a bone golem boss in Scholomance. After being defeated by the Alliance during the Battle for Andorhal,[2] he is recreated from bones within Scholomance's Chamber of Summoning. He appears after Lilian Voss leaves to chase Darkmaster Gandling.

Following the Fourth War, Mathias Shaw stated that according to Argent Crusade reports, Rattlegore is still present and active in Scholomance, it would appear to have been resurrected again, or rebuilt, and remains just as dangerous and disturbing as ever.[1]

Rattlegore was thought to have been destroyed in Andorhal, but Gandling immediately began preparations to reanimate the clattering terror so he could guard against intruders. The darkmaster sought to make Rattlegore more ferocious than ever, imbuing him with an insatiable desire to harvest raw materials from his enemies.

As soon as the last boneweaver dies, run quickly run to a corner, as Rattlegore will spawn in the middle of the room after Voss and Gandling exit. Note the location of the six Bone Piles in the room. They can be interacted with to pick up a "debuff" lasting five minutes that absorbs the next Bone Spike cast by Rattlegore. The piles respawn after 10–15 seconds, so have a shield up before the fight starts.

During the fight, the tank will need to kite Rattlegore around the room until the Rusting debuff drops. However, be aware of the bone piles. They will occasionally flare up with bright flames, denying access to the bone pile objects within them and blocking off a portion of the room for a few seconds. All players need to keep track of their bone shield debuff and drop whatever they are doing to refresh the buff if it gets used.

This is a one phase fight, so the same abilities are in play from full health to zero.

Intro
Talking Skull yells: Die, Gandling! Kill him!
Darkmaster Gandling says: My dear, it appears we have visitors! Friends of yours, Voss?
Lilian Voss says: You there! Make yourselves useful and deal with these summoners!
Defeat the Boneweavers to aid Lilian Voss!

Gauntlet
Darkmaster Gandling says: Their deaths only serve to empower my summoners further! Behold!
Lilian Voss says: You feed their souls to their brethren? You are sick.

Players getting hit by Bone Spike without a shield
Click on a Bone Pile to protect yourself from Bone Spike!

Rattlegore appears as a legendary Warrior card in the Scholomance Academy expansion for Hearthstone. His effect resurrects him with -1/-1 stats each time he dies, and his flavor text reads: "He looks bad now, but he was pretty handsome in his 20/20s."