This article is about the insectoid beasts. For other uses, see Ravager (disambiguation). 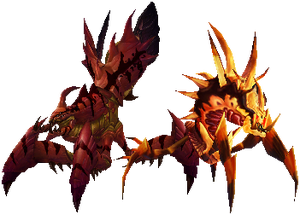 Ravagers are voracious insectoid predators[1] native to Draenor, now Outland. They first arrived on Azeroth aboard the draenei's dimensional fortress, the Exodar.[2]

“Ravagers reproduce quickly and eat anything. Like crickets. They're also homicidal and roughly the size of horses. Not like crickets.”

Ravagers were one of the creatures most heavily mutated by Draenor's destruction and the ones on Outland today barely resemble their original form. Draenor's ravagers were built similarly to silithid.

Ravager eggs are small, pulsing and purple in color. Although covered in spikes, they seem to be rather fragile. Each egg is swarming with multiple larvae.[3] Ravagers hatch as harmless grub,[4] but soon disappear into pupae, only to emerge as slender wasps with a swarm mentality and a ferocious sting.[5] This process only takes a few days.[6] Wasps quickly set out to gorge themselves until their wings can no longer support their body weight, after which they undergo a third and final metamorphosis into a vicious four-legged insect, whose distinctive, gurgling click-hiss instills fear in orc and draenei alike. Heroes should beware the fully-grown ravager's serrated mandibles (capable of shredding armor) and the lacerating spikes ravagers eject from their armored carapaces.[5]

The Shattered Hand orcs of the Spires of Arak and the Laughing Skull orcs of Gorgrond tame and breed ravagers, even employing them as mounts in battle.

Following Draenor's destruction, ravagers can now be found in Hellfire Peninsula, Shadowmoon Valley, and the Blade's Edge Mountains, often lurking behind cliffs and waiting to pounce on any prey foolish enough to wander within range of their blindingly fast, razor-sharp claws.[7] They come in two distinct models, one with more spikes and glowing eyes.

The rock flayers seem to contain a gland that allows them to control ravagers at least allow them to work together. It's possible the rock flayers could see them as pets, or share some kind of other relationship with them.[8]

Though ravagers are not normally native to Azeroth, the Exodar carried some native Outland creatures with it to Azeroth, including ravagers. When the Exodar crashed, it resulted in the unfortunate escape of these fierce beasts into Azuremyst Isle and Bloodmyst Isle, causing a disruption of the native flora and fauna there.[1]

[Grinning Reaver] was purchasable from the In-Game Store, but is now unobtainable.

Ravagers are a family of Cunning pets and are tamable by hunters starting at level 10. They can through the use of

[Ravage], violently attack an enemy, causing the enemy target to take 4% increased physical damage for 25 sec. This takes the place of abilities such as a rogue's

There are 14 different skins available for ravager pets. Some from Hellfire Peninsula have sharper spikes, such as the

Quillfang Ravager. Ravagers are sometimes picked up as an draenei starting pet or an Outland novelty. It is also possible for a member of the Horde to travel to Azuremyst at low levels and acquire this pet, making it somewhat of a novelty for low-levels.