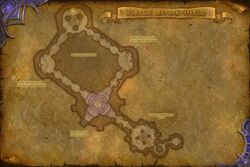 The haunted corridors of The Ravenscrypt.

The Ravenscrypt is a large catacomb underneath Black Rook Hold. It is the first area players encounter when attempting the dungeon. The night elves who once laid here in peace have been disturbed by the Burning Legion's presence and seek to defend their keep from intruders. The crypt holds the tombs of two figures in the Ravencrest family, The Mausoleum of Lady Velandras and The Mausoleum of Lord Etheldrin. It also holds The Grand Sepulcher, occupied by The Amalgam of Souls, the first boss of the dungeon. After The Grand Sepulcher the Hidden Passageway takes you to the Chamber of War and subsequently the rest of the dungeon.

Two paths deviate to both Etheldrin's and Velandras's tombs. One of these paths is open at random each time you start the dungeon.