Razorfen Kraul is the ancestral home of the quilboar, heavily entrenched within the thorns that supposedly sprang from the corpse of the demigod Agamaggan.[1] It is found in the Southern Barrens, at the far southern edge, west side. The enemy level range is 32-35.

Ten thousand years ago - during the War of the Ancients, the mighty demigod, Agamaggan, came forth to battle the Burning Legion. Though the colossal boar fell in combat, his actions helped save Azeroth from ruin. Yet over time, in the areas where his blood fell, massive thorn-ridden vines sprouted from the earth. The quilboar - believed to be the mortal offspring of the mighty god, came to occupy these regions and hold them sacred. The heart of these thorn-colonies was known as the Razorfen. The great mass of Razorfen Kraul was conquered by the old crone, Charlga Razorflank. Under her rule, the shamanistic quilboar stage attacks on rival tribes as well as Horde villages. Some speculate that Charlga has even been negotiating with agents of the Scourge - aligning her unsuspecting tribe with the ranks of the Undead for some insidious purpose. 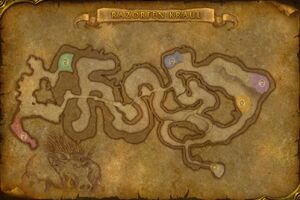 The entrance to Razorfen Kraul