This article is about WoW servers. For lore realms, see plane. 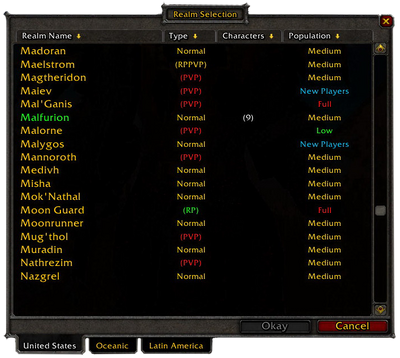 A realm is an instance of the World of Warcraft (WoW) game world. Realms are hosted on physical devices called server blades (for this reason, the terms "realm" and "server" are often used interchangeably). This prevents any one realm from becoming too crowded and overwhelming its associated server, provides for better connection times by allowing players to connect to local servers, allows for localized communities based on language, and allows different play-styles for different groups of users. Each realm also has its own name, generally taken from an important character, location or group within the Warcraft universe.

To play WoW, you must first choose a realm to play on. You then connect to this realm over the Internet. Blizzard has servers in the US, Europe, China, and Korea. For a list of all realms, see realms list.

Choosing a server is an important decision involving many factors. For a fuller exploration and some helpful tips for choosing, see Picking a Server.

Each realm is a complete version of the game world but has its own player characters who are tied to that particular realm. Players can interact with all the characters on their current realm but cannot generally interact with players on other realms. This includes communicating, forming parties and guilds, sending mail, trading and directly interacting. Each realm is a discrete instance of the game world, and as such events that take place on one realm will not affect other realms, including world progression such as the Isle of Thunder, and realm first achievements.

A character must be created on a specific realm, and can only be played by selecting that realm. Players may create characters on any number of realms up to a maximum of fifty characters on an account.

Exceptions to the above rules include Connected Realms, where multiple realms function as a single cohesive realm; cross-realm zones, where certain zones may feature characters from several different servers; and battleground, Dungeon Finder and arena instances, which may feature characters from separate servers. One notable exception is the RealID and BattleTag systems, which allow players to invite other players from other realms to join their party. All characters in the party will be moved to the realm of the current leader and will function fully in that realm, including queuing for arena and instances.

For more information on each type of realm and advice on choosing the right type for you, see Picking a Server.

There are currently four main types of realm available to players: Player vs. Environment (PvE), Player vs. Player (PvP), Roleplaying (RP), and Roleplaying Player vs. Player (RP-PvP). Each type of realm features a slightly different ruleset. While PvE realms are the basic option, PvP and RP-PvP realms allow for increased world PvP, while RP and RP-PvP realms are designed to facilitate roleplaying, and accordingly have certain requirements and expectations of their players. Test realms are a special type of realm available for players to test features from coming patches.

Abbreviated PvP, the player versus player realm differs from the normal realm. PvP realms have an increased amount of player versus player combat, in the form of World PvP; entering any contested or enemy territory automatically flags the character being used for PvP combat, and the character cannot be unflagged while in these zones. The player will remain flagged for five minutes after having left a contested or enemy territory. PvP realms are generally recommended for those who enjoy knowing that they could be attacked at any time.

Abbreviated RP, the roleplaying realm features the PvE playstyle with roleplaying rules, which apply to behavior and naming.

Abbreviated RP-PvP, the roleplaying-player versus player realm features the PvP playstyle with roleplaying rules, which apply to behavior and naming.

Not a normal option for character creation, Test Realms are special realms that are periodically made available, in which players can try experimental features in development before they get released as general patches. Test realms often exist in both PvE and PvP varieties.

As with all World of Warcraft play, servers are divided into regions. The current regions are Americas & Oceania, Europe, China, Taiwan and Korea. World of Warcraft accounts are region-specific and only allow for use of features related to that region, including access to servers.

Characters cannot be transferred to realms in other regions, and a player cannot communicate with or invite players from other regions. Cross-realm features such as cross-realm zones and battleground instances do not function cross-region. Currently, all leaderboards and ladders (eg Challenge Mode) are region- or realm-specific.

Many server names are found in multiple regions. Non-US realms are distinguished on multi-region server lists by use of a prefix, such as Aegwynn and EU-Aegwynn.

While you will not be banned if you do not fluently speak that realm's specified language, you may feel more comfortable in a realm where the majority of players speak a language that you understand.

Each realm has a population listed on the realm selection screen. Each realm is characterized as having Recommended, Low, Medium, High, or Full population. Recommended realms are realms that Blizzard Entertainment feels will give a new player the best experience, while the rest are categorized based on how many players are currently logged into the realm. Players cannot create a character on a Full realm unless they already have characters on that realm. Full realms are deemed 'full' by Blizzard and as such, their 'full' status does not fluctuate like a 'high' population realm's might. There is no reason to wait until off-peak times to see if you will be allowed to create a character on a 'full' realm.

A realm's population impacts its play experience in many ways. Higher population server boasts far more players with whom to communicate, trade and group, but may feature waiting times simply to log into the game, and users may experience lag and server stress problems at peak times. On lower population servers there are fewer other players to group with, making non-cross-realm features such as an arena, trading and serious end-game play much harder to achieve. However, players do not have to queue to play the game, and lag and server problems are minimal.

The population can also affect play within the larger game world. High population servers may feature far more competition for resources and quest mobs, and an increased chance of griefing or world PvP, especially on PvP servers. In extreme cases, high numbers of players in busy areas can cause long queues to complete quests, or even cause the server to crash. Lower population servers typically feature little such competition, but also make it harder to find other players with whom to interact. However, in extremely low population areas, the cross-realm zones feature may act to mitigate these differences by introducing players from other realms. This feature does not affect capital cities or most end-game zones but may improve the experience while leveling on lower population servers. While server population affects many areas of the game world, it has little impact on cross-realm aspects of the game, such as non-rated battlegrounds or dungeons queued for through the Dungeon Finder.

Aside from the overall population, each server features a different balance between the factions. Unlike the overall population, this information is not displayed in the server list, although it can be viewed through sites such as WarcraftRealms.com. The population of a character's faction is often far more important than the combined population of the server, and since many aspects of play including the auction house are faction-specific, individual characters' play experience is largely determined by this rather than by the total population. For example, a Horde character may play on a server highly populated with Alliance characters, yet find few other Horde characters with whom to play, trade, etc. World PvP is one area where the population of the opposite faction can be directly significant, especially on PvP servers.

While different realms are almost identical in their game world, NPCs and rules, in practice each offers a slightly different playing experience, as well as a unique collection of players to encounter and interact with. While server type, population, and language are some of the more obvious differences between servers, there are many other factors that can lead to realms offering their own unique environment.

As separate instances of the game world, realms may develop their own reputation or sub-culture, specific to that server, or even to one faction of that server's population. The presence of well-known guilds or players may also affect the reputation of a realm, with some realms becoming well-known or notorious as a result of the actions of certain inhabitants.

Player interaction ensures that each realm offers a unique experience, with communication and group play largely only available within a server. Aside from population and server type, some realms feature more guilds with a certain focus, such as rated battlegrounds or high-end raiding, with players sometimes choosing to transfer characters between servers in order to join a particularly prestigious or desirable guild.

Realm statistics provide some interesting insight into overall player trends and certain differences between regions and server types. The following data was taken from WarcraftRealms.com, current for October 2015, and represents only the number of characters recorded on US and EU servers.

US Blizzard Support Which realm should I pick to play on?