The Recruit-A-Friend, often referred to as RaF, program is a referral system, through which players can recruit friends or family members into World of Warcraft. When a player chooses to recruit someone, the recruit is emailed an activation link for a starter edition account. Accounts created through this referral system become "linked" with the recruiter's account for 90 days. If the trial account is upgraded to a paid subscription, both the recruiter and the recruit gain benefits when they play World of Warcraft together.

The current Recruit-A-Friend program will be closed on June 11 and be replaced by a newer program in the future.[2]

With patch 8.2.5, the program was re-opened with new Explorers' League-themed rewards.

How to recruit a friend

). Enter your friend's email address, and a custom message if desired. Now, your friend must open the email sent by Blizzard, and follow the link to create an account. Once the account is created, they need to verify it with Blizzard, through a follow-up email. Then they can follow the link in the invitation email again, and they will be prompted to choose which account to RAF link. Typically, this is WoW1. After this point, the accounts should be linked. 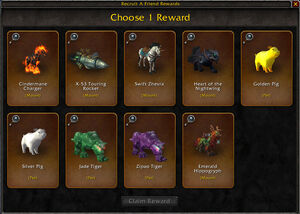 The rewards available as of Patch 6.2

Lasts for 90 days after the recruitment

The Recruit A Friend program is back and better than ever! Now you can choose from 8 different mount and pet rewards—including the brand-new Emerald Hippogryph—and enjoy leveling benefits all the way to level 85.

The upgraded Recruit A Friend allows you to email friends and family members Starter Edition activation keys for World of Warcraft from directly within the game. To get started, simply open up your in-game Friends List and click the new Recruit A Friend button.

You can find the original announcement here: http://forums.worldofwarcraft.com/thread.html?topicId=24038460723&sid=1

Beginning in just a few days, players who participate in the Recruit-A-Friend program will receive a whole new reward for showing a friend the ropes in Azeroth: the X-53 Touring Rocket, a two-seater flying mount that automatically increases its speed as your mount skill improves (up to 310% speed if you already have a 310% mount). The X-53 will be replacing the current Zhevra mount reward, which is retiring from the Recruit-A-Friend business after a good run. If you've already claimed a Zhevra (or claim one prior to the change), you’ll be able to hang on to it, of course. We’ll have more details on the new Recruit-A-Friend mount once it becomes available.

With the new Recruit-A-Friend program, you can earn an exclusive Zhevra mount, receive a FREE month of game time, and gain access to other exciting in-game benefits. From the moment your friend creates a character and starts playing, you'll both earn triple the experience when grouped together and have the ability to summon one another from anywhere in the world. Also, for every two levels of experience your friend earns, they can grant one level of experience to one of your lower-level characters.