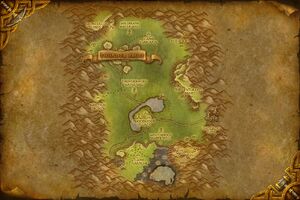 It is a peaceful and reflective site where one can step out of the world of Thunder Bluff into a place serving as a transition between that world and the next.[1]

Red Rocks is a sacred burial ground for the tauren tribes,[2] where fallen heroes of the tauren are sent to the Earth Mother and Sky Father via cleansing flame.[1] Only the most valiant tauren are laid to rest at Red Rocks. It is an honor bestowed upon the great warriors who helped found and defend Thunder Bluff and those who have given their lives for the greater good of their tribes and chieftains.[2] Red Rocks isn't just a place for death, but for life and its greatest journeys too. Tauren braves fulfill their rites to enter adulthood, listening for the wisdom and blessings of their ancestors on the winds.[3]

Recently, a group of Bristleback quilboar invaded Red Rocks and defiled the holy place with their filth, which has greatly enraged the tauren of Thunder Bluff.

The top area of Red Rocks is also used for ceremonies. At the start of the war against the Lich King, Hamuul Runetotem performed a ceremony atop Red Rocks for a deceased female tauren and her son. The Bristleback quilboar attacked him there, but he defeated them. Valeera Sanguinar and Rehgar Earthfury flew there to meet with Hamuul and to invite him to Theramore and the New Council of Tirisfal.[4]

Red Rocks was also the place where Cairne Bloodhoof was cremated.[5] Kador Cloudsong summoned his spirit to speak with Baine at the beginning of the trial of Garrosh Hellscream.[1]