Red whelps are the hatchlings of the red dragonflight. 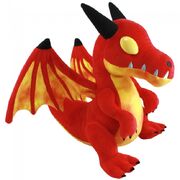 Red whelps are the youngest of red dragonkind. Scales resembling solid flame glisten on the small dragon’s form. Although not great in size, she nevertheless has wicked claws, and her fangs are visible as she turns her head. Though clearly a predatory creature, the glint of wisdom and kindness shines in her eyes. These hatchlings are highly intelligent; unless newborn, they know enough about humanoid creatures to be friendly even when first encountered. They are suspicious of orcs, and avoid them if possible, due to the Horde’s previous enslavement of the red flight. Those red whelps raised near Grim Batol are more aggressive due to the events that occurred there (and possibly for other reasons connected to the contents of the fortress).

Red whelps flee combat if alone or clearly overwhelmed. If they are with a group, older whelps attack in order to give the younger children a chance to retreat; red dragons invariably put their own health and wellbeing second to that of a friend or loved one, even at this young age.