For the lore of the zone and its status after the Cataclysm, see Redridge Mountains.

The Redridge Mountains, or the Red Ridge Mountains, are located east of Elwynn Forest, northeast of Duskwood, and south of the Burning Steppes. Although it may be considered contested, Horde characters have no settlements or NPCs and it is thus a place they use mostly for passing through to reach Flame Crest or Stonard.

An idyllic region of rushing rivers, towering elms and rising elevations, the Redridge Mountains are under Stormwind's protection (though since the second war it is technically independent), and remain one of the last peaceful regions in Azeroth. The people are content and calm, and supply Stormwind with timber, fish, and crops. A force of Blackrock orcs from the Burning Steppes has secured Stonewatch Keep, but so far the orcs keep to themselves.[1] In comparison with Westfall, Redridge is still relatively stable.

On the northern bank of Lake Everstill is the Alliance town of Lakeshire, the central hub for this faction's adventurers, offering many services and quests, as well as flight paths. As the town is under constant siege by gnolls and Blackrock orcs, adventurers should use extreme caution around this town.

The enemy-held Stonewatch Keep and Tower of Ilgalar are connected with quests, but are also very dangerous and require a party to handle properly.

The crossroads known as the Three Corners, located in the southwest corner of the zone, connects the town of Lakeshire with Elwynn, Duskwood and, via the Lakeridge Highway, Stonewatch Keep. The highway itself is quite a dangerous place occupied by dragon whelps, gnolls, murlocs, and wild animals. There are also a few camps located in Redridge — an orc camp in Render's Valley, Shadow Hide gnoll camps near the Tower of Ilgalar, and murloc camps near the lake. While the lake's surface appears peaceful enough, murlocs reside beneath the waves, and rumours of sightings of a sea monster persist. 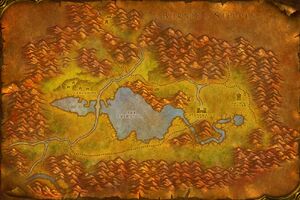 The Redridge Range[2] is a mountain range in the southern sub-continent of Azeroth that stretches from the zone of the Redridge Mountains to the zone of Deadwind Pass. The range once extended much farther north, but three hundred years before the opening of the Dark Portal the range was shattered by the summoning of Ragnaros and the creation of Blackrock Mountain. Warcraft RPG

The Redridge Mountains are home to several humans of note, the great bulk of which reside in Lakeshire. At the fallen bridge Marshal Marris sends promising young humans to eradicate the clusters of Shadowhide gnolls and Blackrock orcs who have taken a chokehold on the land. He is assisted in his efforts by Verner Osgood, who also seeks to rid Redridge of the vile Redridge gnolls. And at the Lakeshire Town Hall, the aging Magistrate Solomon recruits adventures to seek help from Stormwind's other bastions of civilization like Stormwind City, Sentinel Hill, and Darkshire. Stormwind City seems to have abandoned Lakeshire to fend for itself like it did to Darkshire and Sentinel Hill. Both these towns say they cannot help Lakeshire due to their own overwhelming problems.