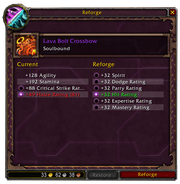 The reforging interface with an item about to be reforged

Introduced to Azeroth by the Highborne,[1] Reforging (also called thaumaturgy) allowed undesired stats on gear to be exchanged for more useful stats. It allowed 40% of a single secondary stat (such as critical strike, dodge, haste, hit or parry rating) or spirit to be exchanged for another secondary stat or spirit. Reforging was handled by NPCs known as Arcane Reforgers located in the major cities. The cost of reforging an item was equal to its sale value.[2] Restoring an item to its original state was free. Stats could only be exchanged for other stats which are not already on the gear. Earlier in Cataclysm's development, reforging was planned to be an ability of Jewelcrafters, Engineers, Tailors, Blacksmiths and Leatherworkers, who would have been able to create items similar to enchantment scrolls which other characters could use to reforge their gear.

in range of reforger

out of range of reforger 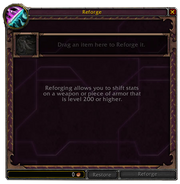 It has been stated that Reforging was not intended to be used routinely on all items, like Enchanting, but to allow more classes to conceivably roll on potential upgrades, rather than being forced to

The four primary stats—Agility, Intellect, Stamina, and Strength—were not able to be reforged. Additionally, attack power, spell power, resilience, weapon speed or damage and armor could not be modified with reforging. 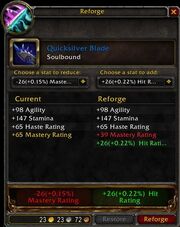