Reins of the Traveler's Tundra Mammoth 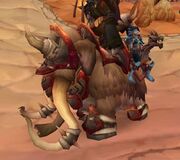 Reins of the Traveler's Tundra Mammoth is a three-person mount that comes with two vendors:

Hakmud of Argus <Traveling Trader> and

Drix Blackwrench <The Fixer> and

Mojodishu <Traveling Trader> (Horde). You can dismiss one or both of them to free up a spot for a friend or two in your party or raid. The buttons used to dismiss the vendors can also be used to force player passengers off the mount. When the vendors are dismissed, they will not return until the mount is dismissed and resummoned again.

from the exotic mount vendor Mei Francis in Dalaran. As Mei Francis is a member of the Kirin Tor, this mount is subject to faction discount, making it cost 16,000

[Tabard of the Kirin Tor] can be bought from Archmage Alvareaux in Dalaran and they should be able to easily run through several Heroic Wrath-Level instances to get to Exalted.

Because mounts are account bound you could conceivably skip getting to Exalted with the Kirin Tor but still only spend 16,000

by buying this mount with a (Horde-side) goblin, using the racial

[Best Deals Anywhere], however the goblin would have to be leveled up to 40 to purchase the mount with the gold, so it's only cost and time effective in certain cases.

"Calls forth the Traveler's Tundra Mammoth, complete with two buddies!"

Ancient manuscripts depict merchants traveling across the frozen tundra with these colossal beasts, leading scholars to believe they are the first domesticated mounts. or Riders and merchants alike trust only this strong and steadfast mammoth to carry them safely across the frigid tundra.

Obtaining this mount awards the achievement,