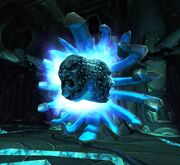 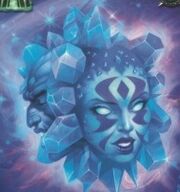 Reliquary of Souls in the TCG. 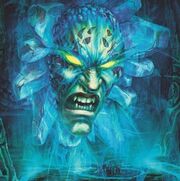 Reliquary of Souls in the TCG back.

Reliquary of Souls (aka Reliquary of the Lost) is a boss in the Black Temple. This boss is a figure with three faces, representing the Essences of Anger, Desire, and Suffering respectively. The three have to be defeated one after the other. They all are DPS races, each with a different twist. It appears that it is some kind of soul vacuum.

Stage One: Essence of Suffering

In the corridor leading to the boss, mobs are on a 15 sec respawn timer, so the raid has to run through it fast. There is no safe place between the trash mobs and the boss. The raid must stay close together at all times. No totems must be dropped (else they aggro respawns). The raid should stop and AoE after one third of the distance, a second time after two thirds, and the last time on top of the ramp leading down to the boss. When nuking, AoE capable classes should do AoE, and point damage dealers should concentrate on the red ghosts first, these are the most dangerous type. It's best to continue moving after all red ghosts are dead, and just keep the larger blue and purple ones tanked - these two types don't deal substantial amounts of damage.

Upon reaching the top of the ramp, it's safest to wait for one repop of the last group, kill them, and then engage RoS fully rezzed, buffed and coordinated. The boss becomes active 15 seconds after the first person steps on the ramp.

This phase is characterized by two things - healing is impossible, and aggro can be easily controlled. Beyond that, Soul Drain must be dispelled immediately.

Since no healing is possible, tanks must be rotated. To facilitate this EoS should move as little as possible. The red circle on the ground marks EoS' melee range. The current tank should stand in the center of EoS, only if a change is due the new tank moves into the current tank, and the current tank takes one step back. Tanks can usually stay for several fixates and should switch only after their health is low (~15%), or if an enrage is due.

High block value is desirable for all players planning to tank in this phase.

Best suited for enrage tanking are rogues with

[Evasion] available (incidentally evasion and the enrage have exactly the same duration). With normal DPS, three enrages can be expected, thus three rogues should be pre-designated. They must step in and take a fixate as in the normal tank rotation, and hit evasion as soon as EoS enrages.

The rogue must not use

[Vanish] after the enrage is over, but rather hand over aggro as described above. If the current tank dies or somehow removes himself from the combat (e.g. with a paladin bubble), EoS switches to normal aggro mechanics (which is very bad).

With good dodge/parry gear, one rogue can tank a whole cycle (all non-enraged fixates plus one enrage).

Normal healing cannot take place during this phase. The only abilities which help are

[Pain Suppression]. Priests should spam PW:S freely, it's also a good idea to cast it on the enrage tank 15 sec before the enrage, so that the weakened soul debuff has worn off and a second shield can be cast during enrage. The safest method to deal with Soul Drain is to have two priests hit

[Mass Dispel] every time it happens.

The whole raid (except the three rogues) stand on the boss. When a player gets fixated, he moves outside the group (but not far, so that the boss doesn't move), thus another player gets fixated next. When an enrage is near, everyone moves out from under the boss except the current fixated person and a rogue moves in. The raid moves back in when less than five seconds of enrage remain, so that the next fixate after the enrage is taken by somebody else again.

After EoS is defeated, it goes back into the Reliquary. At that point, several ghosts spawn and head towards the raid. To maximize the health and mana gain, the raid should all stand on one spot. It's a good idea to use mana intensive abilities (such as making mana gems or summoning new demons) at the beginning of the ghost phase so that the players can start the next phase with full mana.

This phase is all about spell steal/interrupt/reflect, beyond healing through the massive damage the raid deals to itself (from the aura). Since EoD deals only low amounts of melee damage, rage generation can be a problem. Therefore the tank should not use abilities like Demo Shout or Thunderclap. Warlocks should keep

[Curse of Tongues] up, and a rogue should use

[Mind-numbing Poison]. Paladins in caster groups should use

[Earth Shield] on casters to reduce spell interruption by damage.

This phase is very healing intensive. Since all damage dealers take 50% of their damage done, raid healers are very busy. Particularly after a spell reflected Deaden is up, damage dealers must be careful not to kill themselves.

Once Essence of Desire returns to the Reliquary, the ghosts appear once more and refill the raid's mana and health.

The initial Seethe buff on the boss can be removed with

[Shield Slam]. To avoid further Seethes, the tank must never lose aggro. Nonetheless, all raid members initially have the Seethe debuff and must therefore be very careful not to draw aggro.

Since the tank is regularly affected by Soul Scream, and the damage by rage burn is higher than that from mana burn, a paladin tank is a good alternative to a warrior tank in this phase.

EoA should be tanked facing away from the raid. Threat generation is crucial. The tanks must spam all his abilities to keep rage (or mana) low. If a Soul Scream is near and a warrior tank has excess rage, he must stance dance to reduce the rage, even though this hurts aggro buildup.

Damage dealers must be very careful while they have the Seethe debuff. After the second scream (at about 20 seconds), everybody should use all DPS cooldowns (and

[Bloodlust]), Hunters should use

[Misdirection], and everybody should go all-out (still trying not to draw aggro).

About two healers should be on the tank, and four (preferably shamans and/or priests) on the raid. While the Aura damage is low, healers may even DPS a little if they have excess mana. Players afflicted by Spite must be topped up before they take the nature damage, and then immediately topped up again before the Aura kills them.

The seethe (de)buff increases aggro generation by 200% for 10 seconds. If an off-tank initially pulls EoA and the main tank taunts after 1–2 seconds, the MTs aggro generation is increased substantially. As in the normal scenario, the raid must be very careful at start, but can start all-out DPS a little earlier (at about 12–15 seconds).

The most dangerous phase by far is the Essence of Desire (phase 2) as going all-out on DPS can and will lead to the player killing himself. Any pets available should be allowed to do as much damage as possible, while the player eases back some on DPS and uses any damage-mitigating or healing abilities to prevent a self-kill. It is a somewhat-tricky balance between doing enough damage to win the DPS race but not so much as to kill oneself.

Freed
Pain and suffering are all that await you!

Recap
I don't want to go back!

Enrage
The pain is only beginning!

Death
Now what do I do?!

Aggro
You can have anything you desire... for a price.

Special
Be careful what you wish for.

Death
I won't be far!

Special
On your knees!

Recap
I won't be ignored.

During the invasion of Outland, Illidan Stormrage traveled to Auchindoun and used a device to siphon the souls of dead draenei there in order to power a massive portal to Argus.[3] While the Reliquary of Souls is never mentioned to play a role in Illidan's plan, it may have had something to do with it given the shared nature of souls.