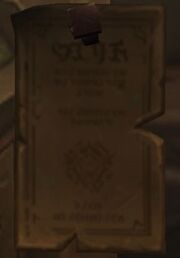 Renathal's Notes on the Medallion of Dominion

Renathal's Notes are letters located throughout Sinfall in Revendreth, written by Prince Renathal.

Ah, the Countess. I have tried to obtain her medallion many times, mostly for fun each time.

She is disturbingly clever and very well informed.

We will need to be both very careful and very meticulous when chasing this medallion.

The Stonewright is untouchable. Not even our own stoneborn forces would dare raise a talon against her.

What is worse is that she is one of the first venthyr, like myself and the Curator. She was not made from a soul, but willed into being by Denathrius himself.

No sinstone, no mortal trappings, or past deeds will bend her to our will. If she is unwilling to provide us her medallion, we stand very little chance of recovering it.

Notes are on the

The Curator was able to hide the Medallion of Avarice before her banishment to the Maw. It will take some time before she is able to remember the location.

This medallion was recovered by the Maw Walker and the Accuser while I was still trapped within the Maw.

How they overcame the might of the Fearstalker is a story worth hearing. Just do not have the Accuser tell it.

In my ignorance, I attempted to use this medallion, MY medallion, in the first failed rebellion.

The medallions are powerful, and in the hands of a Harvester they can be used to warp the very fabric of Revendreth to one's will, if they have enough anima.

But they are also carriers of the Master's will. What they do, he knows. And so I lost my attempt to stop Denathrius the first time, my well thought out schemes lay bare for his examination and elimination at every step.

The Medallion of Dominion was taken from me the day I was flung into the Maw.

It was last seen being returned to the Master by the cursed hands of the Lord Chamberlain. The medallion had been used to crush the Accuser and take the Medallion of Pride for the would-be Harvester.

Denathrius mentioned that it was promised to another. We must learn who this "other" is.

Denathrius gave MY medallion to that insidious corpsemonger Kel'thuzad?!

The audacity. The arrogance! The bad taste!

We must recover it. As long as the medallion is in Kel'thuzad's hands that lich will be able to hold sway over countless venthyr if he learns its secrets.

No lich should hold dominion over anything not of Maldraxxus.

The Maw Walker recovered the medallion of Dominion from Kel'thuzad. Shame they did not finish off that interfering lich but we must trust to our Maldraxxi allies to accomplish that task.

Stolen by that upstart bootlicking backstabber, the Lord Chamberlain, the Medallion of Pride is one of the most powerful of the seven.

We will not use subtlety here. I will see if the Maw Walker would like a bit of revenge on that unkempt creature who fancies himself a venthyr.

They will probably need some allies if they plan to assault the Halls of Atonement.

This medallion rests upon the neck of the Tithelord.

Despite his blustering he is a dangerous venthyr. Most Harvesters of Envy are. Theirs is not a title earned through inaction or mercy.

I suspect he will not relinquish it willingly or easily.