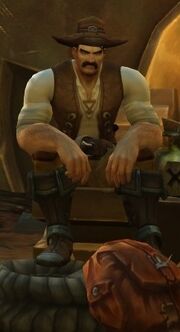 Reno Jackson is a human member of the Explorers' League. He can be found on Mechagon Island. He makes an appearance at the Maker's Ascent in Uldum during the Assault in Uldum along with several other members of the league.

Reno first appeared as a major supporting character in the League of Explorers adventure for Hearthstone. In Hearthstone lore, Reno is a world-renowned archaeologist, explorer, and treasure hunter... or so he says. His membership in the League of Explorers is currently on probation.[1] Reno is quite the dashing adventurer, as he's sure to inform you, but sometimes he gets a little confused about the difference between treasure hunter and archeologist. While his fingers can be a little sticky, Reno's heart is in the right place. He's out to prove that he deserves his place in the League of Explorers.[2] He accompanies the player through the Temple of Orsis, the first wing of the adventure. The first boss encounter, Zinaar, is caused by Reno not being able to resist the temptation of rubbing a magical lamp.[3] Reno claims that he once infiltrated the ogres of Dire Maul in disguise and that he once snuck through the Lyceum of Blackrock Depths to acquire something.[3] Reno hates snakes.[4] Defeating all three encounters of the wing rewards Reno as a legendary card whose flavor text reads: "Reno is a four-time winner of the 'Best Accessorized Explorer' award."

In the Saviors of Uldum expansion, Reno reappears alongside the rest of the League of Explorers to save Uldum from the League of E.V.I.L.. In this incarnation, he is a legendary mage card known as Reno the Relicologist; since Reno's class is based on whatever amazing artifact he has found and is currently using, he takes the role of a mage when wielding a magical "Gatling wand".[5][6][7] His flavor text reads: "All his life, Reno Jackson was only a gatling wand away from becoming the greatest and most terrifying mage who ever existed."

During the final boss fight against Rafaam and Galakrond in the Galakrond's Awakening adventure, Reno is revealed to actually be a young blue dragon named Renogos. Reno himself was unaware of this fact, having been delivered to an orphanage as an egg, though he always suspected there was "something different" about him due to his love for treasure and magic tricks. After the boss fight, Renogos reverts to his human form and loses all memory of his true identity. Defeating the boss rewards the Amazing Reno as a legendary mage hero card, whose flavor text reads: "Reno!" / "Please address me by my proper title." / "<sigh> Amazing Reno..."

He may be related to Elizabeth Jackson, Emily Jackson or Private Jackson.