“We are proud to call ourselves the last tribe of Forest Trolls to serve the Horde. In time, we will overcome the other tribes, and the Dwarves, and the Hinterlands will be ours.”

Never one of the larger tribes in the Amani empire, the Revantusk tribe was nearly wiped out by the Troll Wars. Reluctantly, the trolls yielded to practicality and moved a safe distance away from the elven invaders. Like other forest trolls, the Revantusks swore that one day they would have their revenge.

As the leader of all the forest trolls at the time, Zul'jin eventually accepted Doomhammer's offer. A few tribes of forest trolls joined their new allies on the battlefield, including the trolls in the Hinterlands. Together, they planned to attack Aerie Peak before moving north.[3]

Shortly thereafter, the Horde burned down the borderlands of Quel'Thalas and slaughtered many high elf civilians. Furious at this wanton destruction of life, the elves subsequently committed all their resources to the war, which the Alliance ultimately won.

Several additional battles later, most of the vanquished orcs on Azeroth were rounded up and placed in internment camps. In the war's disastrous aftermath, the Horde was shattered, and many forest trolls deserted their former orc allies without a moment's hesitation. The Revantusks had little choice other than to flee as well, for their numbers were far too few to liberate the captive orcs, particularly when the orcs themselves seemed uninterested in freedom. Because they continued to feel some loyalty toward the Horde, the Revantusks were the target of many attacks from other forest trolls. Eventually, the Revantusk tribe relocated to the coast of the Hinterlands, where they hoped to avoid further notice.

Then the courageous orc Thrall began reassembling a new Horde. He resolved that his people would return to their shamanistic traditions and establish a nation of their own. Word of the revitalized Horde and its noble goals soon reached the Revantusk trolls, who were still dwelling in Lordaeron. The news stirred the trolls' interest, and the tribe immediately dispatched its speediest runners to make contact with the orcs.

Thrall was wary of the trolls at first, but he came to see that the Revantusk trolls were unique among forest trolls in a fundamental way. The Revantusk tribe had never had much in the way of the fighters or resources, and so it had instead decided to specialize in the trickier art of negotiation. By the time they spoke with Thrall, the Revantusks had acquired a reputation for trustworthiness that was well deserved.

The trolls were impressed by Thrall and his dream. Even so, they remembered the recklessness and corruption of the Old Horde. Thus, the Revantusks declined to rejoin the Horde, but they did agree to a pact of friendship and mutual assistance. 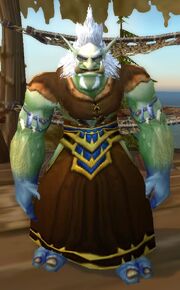 The recent Cataclysm has seen Elder Torntusk's return to the Revantusk Village and the Revantusk tribe openly supporting the Horde. The Revantusk are battling the other forest troll tribes in the region and the wildhammer dwarves in an effort to claim the Hinterlands for themselves and the Horde. Primal Torntusk can be personally seen leading the Revantusk efforts in gaining control of Jintha'Alor.

Revantusk Speakers can be found in Zuldazar on Zandalar. They are friendly to Horde players and say their tribe will always stand by the Horde.

Thrall was not always so welcoming toward the forest trolls. He expressed disgust that forest trolls were ever considered a part of the Horde, he then killed several of them.[5] This is rather uncharacteristic of Thrall, however, and may have been retconned. If it is still canon, it is unknown what caused his change of heart, although it is conceivable that it was trolls in general that he despised, and thus the events with Sen'jin's jungle trolls may have changed his mind about forest trolls as well. It may also be possible that he simply feels disdain for forest trolls for abandoning the Horde, and that since the Revantusk have renewed their allegiance, he considers only their tribe worthy.

Whilst their full relationship with elves is unknown, one of the authority figures in the tribe, Huntsman Markhor was known to work with Forsaken high elf, Dark Ranger Velonara. Velonara said that Markhor had been known to disagree with her and her views on arcane magics many times, but also understand their co-operation is necessary for the Horde.[6]

The subject of this section was removed from World of Warcraft in patch 1.11.0.

Revantusk Trolls was a faction introduced to World of Warcraft in patch 1.5. If a level 60 Horde player were to complete all the quests with the Revantusk trolls, they could reach 340/3000 neutral with them. However, after patch 1.11, the trolls were removed as a faction and are merely friendly to Horde players, like the Brackenwall Village ogres.

Before patch 1.11, there were many rumors about the future of the Revantusk trolls as players speculated on what would become of the faction. The two most popular beliefs would be that the trolls would become a Battleground faction, in combat with the Wildhammer clan, while the other theory saw the trolls becoming a part of a new instance to be introduced to the Hinterlands. Neither rumor became reality as the faction was removed from World of Warcraft.

The Wildhammers ended up as part of the Twin Peaks battleground but despite the great enmity between the Wildhammers and the Revantusks, the reintroduced Dragonmaw clan takes the place as the Horde faction, possibly because the Revantusk are too small or they just have no plight with these Wildhammers as their home is in the Hinterlands.

Thrall has been in communication with the Revantusk forest trolls, who agreed to a tentative alliance with the Horde.[7] They find it hard to relate to the Darkspear trolls.[8]