Not to be confused with void revenant.

Revenants are armored elemental creatures. They look similar to floating suits of crude armor. They also wield large maces and carry giant shields. The most notable revenant was the Guardian, protector of Frostmourne. Some are soldiers of the Old Gods in the Elemental Plane.[1]

Revenants appear in several different zones of Northrend, such as the Dragonblight and Zul'Drak.

Note that there are more types, but there are only four models. Classifications such as all blue earth revenants being ice or frost (and which is which) is partly speculation. Death revenants seem to be clearly separate, despite using the model of air revenants. 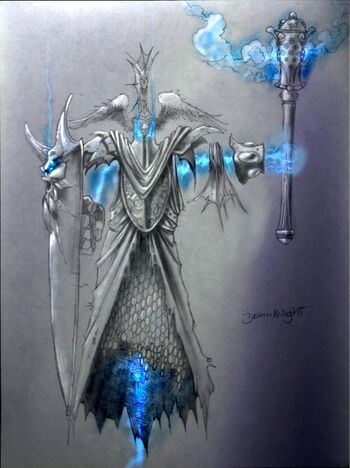 An undead revenant in Warcraft III

They are hateful undead creatures who are outside the domain of Ner'zhul's control. Bonded to base elemental spirits, these phantom creatures live only to rage and use their powers for destruction.[2] They have the ability to cast elemental magics according to their type. Although undead, Revenants have no affiliation with the Scourge as they have some sort of innate immunity to Ner'zhul's psychic control over undead. They remain neutral in the conflict between the Horde and Alliance.

Revenants are minor elemental creatures who once served as foot soldiers for the malefic Old Gods when the world was young. When the titans defeated the Old Gods and chained them beneath the cold earth, the wicked revenants and their greater elemental cousins were banished to the Elemental Plane. Locked away from the world they once ruled, the fire of the elementals' hatred for the titans and their creations burned with increasing intensity. As the millennia passed, reckless mortal wizards began to summon elementals back into the physical world. Free at last, many revenants struck out against the mortals that had summoned them and set out to forge their own destiny among their native elements in the world. These evil beings exist only to inflict strife and sow elemental chaos. Though they have limited intelligence, their sheer hatred and will to destroy make them fearful opponents when encountered in the wilds of the world.[3] Many still live on the Elemental Plane.

Note that the RPG appears to attempt to reconcile their naming/element scheme in Warcraft III with the current system of four (and only four) distinct elemental factions: