Rheastrasza, also known by her goblin guise Rhea, is a quest giver initially found at Rhea's Camp in the Badlands.

[47] Rheastrasza's Gift, she is killed by Deathwing, who was after the egg. The egg he destroyed, however, was not the purified one, but Rheastrasza's own egg. The surviving purified egg would later hatch as the Black Prince Wrathion. 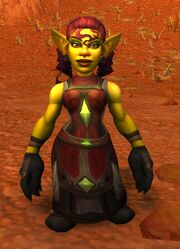