For the in-game book, see Rise of the Horde (History of Warcraft).

Rise of the Horde is a novel by Christie Golden focusing on the events of the Old Horde and its culture in the Warcraft universe.

Chris Metzen himself commented on the book, which features the draenei's flight from Argus and, as the title implies, the corruption of the orcs.

"The book DOMINATES, and you're going to really dig it. Durotan, Ner'zhul, Gul'dan, Doomhammer, Hellscream, Kil'jaeden, Velen; this story is the one you've been waiting for. I'm getting geeked up just thinking about it."

The book is written from the 3rd-person perspective, except for a note every chapter narrated by Thrall in the first person. Most of the story is told from the perspective of Durotan and Velen.

The book finally answers questions relating to Ner'zhul, the massacre of the draenei, the true color of orcish skin, and daemons. It is notable for painting a much more sympathetic picture of Ner'zhul than previous lore, showing him as a generally good-hearted but deceived and somewhat ineffectual leader.

Though the orc on the cover is almost certainly Grom Hellscream, he only appears briefly in the novel.

A number of plot elements introduced in Rise of the Horde, such as Oshu'gun, the Ata'mal crystal, and the Throne of Kil'jaeden, were developed solely by Golden, but the lore department at Blizzard liked them so much that they included these elements in The Burning Crusade.

Though the young Warchief Thrall ended the demon curse that had plagued his people for generations, the orcs still wrestle with the sins of their bloody past. As the rampaging Horde, they waged a number of devastating wars against their perennial enemy−the Alliance. Yet the rage and bloodlust that drove the orcs to destroy everything in their path nearly consumed them as well.

Long ago, on the idyllic world of Draenor, the noble orc clans lived in relative peace with their enigmatic neighbors, the draenei. But the nefarious agents of the Burning Legion had other plans for both of the unsuspecting races. The demon-lord Kil'jaeden set in motion a dark chain of events that would succeed not only in eradicating the draenei, but forging the orc clans into a single, unstoppable juggernaut of hatred and destruction.

RISE OF THE HORDE

An original tale of magic, warfare, and heroism based on the bestselling, award-winning electronic game series from Blizzard Entertainment. 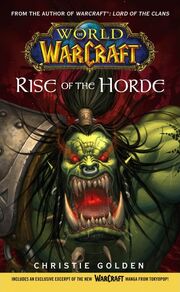