For other uses, see Risen Ghoul. 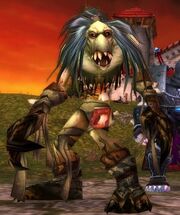 [Raise Dead] ability. They can be sacrificed using the

[Death Pact] ability to return health to the death knight. The ghoul has unlimited duration and is controllable by the death knight, acting like a hunter or warlock pet. The ability

[Dark Transformation] empowers all the ghoul's abilities, as well as giving the ghoul a 100% damage buff for the duration.

Previously, a Risen Ghoul could be summoned by any death knight. The creature would only last for 2 minutes outside of the Unholy specialization (which had the passive

[Master of Ghouls]). Considering that neither Blood nor Frost death knights could empower Risen Ghoul, the cooldown frequently was activated only for the purpose of using

[Raise Dead] was restricted to Unholy death knights and saw the removal of the Master of Ghouls passive (it was no longer necessary).