Rivett Clutchpop is a goblin engineer in the service of the Horde warship Hellscream's Fist.

He is the one that first sights the new uncharted land that the airship's crew is searching for. After the first Alliance attack, he can be found on the lower bridge talking with Sky Marshal Schwind.

After the airship is taken down by Alliance gyrocopters, he is one of the few survivors, and regroups with Nazgrim, Shokia, Gorrok, Kiryn and the player at Honeydew Village, in the Jade Forest. Later he tasks adventurers with various quests to establish the Horde's presence and to secure the loyalty of the Forest Hozen as Horde allies. After the finale of the Jade Forest, he is transported to Kun-Lai Summit where he works with the Horde agents to set a foothold.

He is seen helping with the construction of Domination Point in Krasarang Wilds and later he defends the hold when the Alliance attacks.

He later aids the rebellion in the Garrosh's Underhold and can be seen standing in the Celestial Court on the Timeless Isle. He can also be seen during the Celestial Tournament. 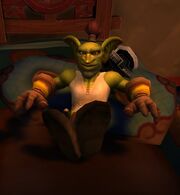 Kor'kron Barracks
I've got the brains, you've got the muscle. Together, we'll make beautiful carnage.

[Expose Armor],[citation needed]  he may be a rogue.