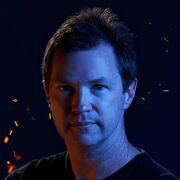 Rob Pardo (alias EnoYls) was the Chief Creative Officer at Blizzard Entertainment,[1] and Executive Producer for Hearthstone. He was also a co-producer on the 2016 Warcraft film.[2] Prior to his position at Blizzard, he was a producer at Interplay. He holds a degree from the University of California at Irvine.

Pardo led the design of StarCraft: Brood War, World of Warcraft and Warcraft III. As Chief Creative Officer at Blizzard, he served as the Executive Producer for Diablo III and

On July 3rd, 2014, Pardo announced that he would be leaving Blizzard, after 17 years with the company. In September 2016 Pardo was revealed as cofounder and Chief Executive of the new Bonfire Studios, alongside other ex-Blizzard personnel including former Vice President of Art & Cinematic Development Nick Carpenter.[4]