Robe of the Archmage 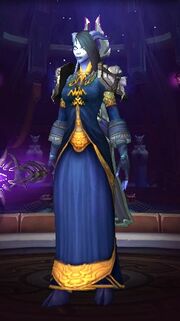 Human female and Gnome male wearing the Robe of the Archmage

This item is crafted with Tailoring (300); taught by

[Pattern: Robe of the Archmage], a drop from Firebrand Pyromancers in Blackrock Spire.

This silk robe comes in three colors, depending on alignment. It can be white (good alignment), gray (neutral) or black (evil). Many of these robes were destroyed when Dalaran fell, but there are still arcanists making them. The robe’s wearer, if an arcanist, gains several powers. Including armor bonuses and magic resistence. If an evil character dons a white robe, she immediately loses power. The reverse is true when a good character dons a black robe. If a good or evil character wears a gray robe, or a neutral character puts on a white or black robe, she loses some power. The loss of power lasts as long as the robes are worn and disappear when the robe is removed.[1]

Since it is bind on pickup and only wearable by Mages, there's little point in learning the pattern or crafting the robe unless the tailor is also a Mage.

The Robe of the Archmage granted a relatively large Spell damage bonus to casters playing prior to the release of The Burning Crusade. The mana clicky was extremely effective for mana conservation; using that, than a gem, could get the mage through several thousand mana before needing to use

[Evocation]. However, the Robe is not without it's downfall; it has relatively low stats compared to other similar-level Mage chestpieces such as the

[Netherwind Robes]. However, the five-minute ability to restore 375 to 625 mana effectively grants the robe an additional 25 to 41 intellect as far as its effect on the wearer's max mana is concerned. This robe was easily the best until upgrading to Enigma Vestments or another higher tier robe.