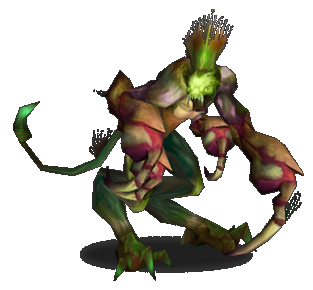 Rock flayers are vicious humanoid creatures native to Outland. They can also be found in Deepholm.

Rock Flayers are one of Outland's indigenous species. Many careless wanderers have been killed by the primitive humanoids who roam the slopes and peaks of the Blade's Edge Mountains in murderous packs. Though they primarily hunt smaller mountain animals, they are not afraid of stalking potential prey that is much bigger than they are. There are accounts of packs of rock flayers taking down even mighty elekk that had wandered into the rock flayers' territory. Their vicious blade scythes and climbing claws are so sharp they can even cut through sheer rock, enabling the rock flayers to climb the most difficult overhangs with ease. Even for a predatory species, they are extremely fast and very aggressive.[1] In addition to their homeland in Blade's Edge, rock flayers can be found in Hellfire Peninsula, Netherstorm, northern Terokkar Forest and Shadowmoon Valley.

The young are hatched from eggs, however, it's unknown if only the matriarch lays the eggs or if any females are allowed.

The rock flayers seem to contain a gland that allows them to control ravagers at least allow them to work together. It's possible the rock flayers could see them as pets, or share some kind of other relationship with them.[2]

A brash fel orc once tried to enslave rockflayer younglings as his personal soldiers. Pieces of him are still scattered across Outland.[3]

Modern anthropologists had hoped Draenor would reveal the origin of the rock flayer. They were disappointed,[4] as only Rock Flayer Island displayed any rock flayers.

Flayers have six limbs: two pairs of arms and one pair of legs. One pair of arms is notably bigger than the other, which is closer to the body than the bigger ones. Flayers have no hands, but rather long, scythe-like claws that it uses for defense and scaling rock. Rock flayers also have long tails that end in scorpion-like stingers. Adult flayers are distinguishable from younger ones by their size and horn-like growths on their backs and shoulders. Adults also have bigger arms and claws than the younger ones. In areas where crystal growth is abundant, the flayers have developed the peculiar growth of crystalline shards from their backs and shoulders.

Flayer Younglings can be captured in pet battles on the border between Hellfire Peninsula and Terokkar Forest.