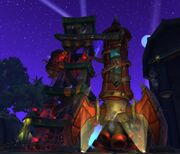 Rockets serve as means of transportation or weapons. They are commonly used by goblins. The largest rockets currently known are the X-52 Nether-Rocket in Area 52 in Netherstorm, Mogul Razdunk's rocket in the MOTHERLODE!!, and Krazzel Crashfuse's rocket in 100 or Bust!. Small rockets are also used during celebrations.

The neutral Tinker hero has a Cluster Rockets ability.

During Gnomeregan's fall to invading trogg mobs, gnomish inventors discovered that their fireworks made effective weapons. Gnomish alchemists took to employing these explosive devices against the incoming hordes of troggs that threatened their city. Sadly, the gnomes were too late, but they had sufficient fireworks to make a last ditch escape to freedom despite the superior forces arrayed against them. Since settling with the dwarves of Ironforge, the two races have worked together to turn the gnomish firework into a deadly weapon. Some of these weapons have made their way to Kalimdor, as gnomes traveling with dwarven compatriots have returned to manufacturing explosives to combat the Horde.[1]