Not to be confused with Royal Dreadguard (Ruins of Lordaeron). 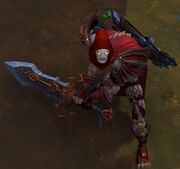 Royal Dreadguards are max level elite Forsaken Dreadguards stationed in the Royal Quarter of the Undercity, and act as the personal bodyguards of the Banshee Queen, Lady Sylvanas Windrunner.

They will attack in large swarms if Sylvanas is engaged, and hit hard. Their aggro range is rather wide, and will use ranged attacks against any intruders atop a flying mount in their vicinity.

Bodies of several dreadguards were seen during the Battle for the Undercity.

Later, they appeared in Darkshore, protecting Nathanos Blightcaller and his two Val'kyr before the fury of Tyrande Whisperwind.