Wowpedia
Register
Don't have an account?
Sign In
Advertisement
in: Removed in patch 4.0.3a, Classic, Speculation,
and 5 more
English

For the zone after the Cataclysm, see Andorhal. 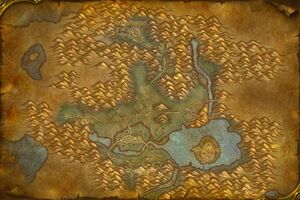 are the ruins of the city of Andorhal, located in the center of the Western Plaguelands. The ruins are controlled by Araj the Summoner, a level 61 elite lich, surrounded by Scourge agents. The inhabitants are for the most part ghouls, skeletons, banshees, and abominations.

Many players in WoW once regarded Andorhal as some of the most difficult (if not the most difficult) non-instance content in the game. During the pre-release beta, all of the mobs in Andorhal were elites, which practically made it an outdoor dungeon. For several months after the original release of WoW, Andorhal was very different than it appears in-game today. Although most of the mobs lost their elite status, the city was still encircled by walls on all sides and had a much thicker infestation of undead than it does currently. Most players, even at level 60, struggled soloing Andorhal, particularly since these were times before Onyxia or Molten Core gear was commonplace. Eventually, Andorhal received a significant nerf; the walls were removed, some houses were spread out or removed, and many mob spawns were similarly curtailed.

The city is now known simply as "Andorhal".

The subject of this section was removed from World of Warcraft in patch 1.4.0.

It is implied by Chromie that the local Scourge forces are attempting to alter the city's timeline, most likely at Araj's command. This is evidenced by the Temporal Parasites that infest the city silos. A detail of note is that the watches of Andorhal, much like the large clock on the ruins of the town hall, were all frozen in time at three o'clock.[2]