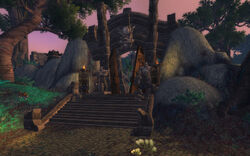 The entrance into the ruins of Dojan

The Ruins of Dojan can be found in central Krasarang Wilds. A mogu ruin, it lends its name to the Dojani River to the east, and the Pools of Youth can be found at the ruins' northwestern extent.

They are presumably the ruins of the "Dojanni Dungeons", built by Emperor Dojan II during his purge of the saurok.[1] Other tales imply that the dungeons were built before that around the Pools of Youth.[2]