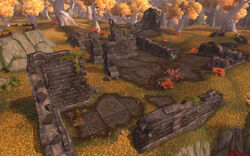 are the ruins of a mogu city in northwest Vale of Eternal Blossoms. Within the ruins are the still much intact Guo-Lai Halls, which contains many secrets. The ruins are mostly infested with spiders and ancient mogu statues, some of which possess life.

A camp, built by the Golden Lotus, sits on the edge of the ruins and serves as a resting spot and quest hub. Golden Lotus Defenders can be found here protecting the small camp.

The mogu, having been cleared out of the Golden Stair, have claimed these ruins as their own and defend them from the encroaching sha. Most of the spiders and pandaren have been removed.