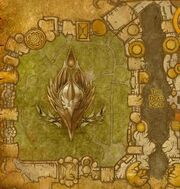 Silvermoon City map; The Ruins of Silvermoon are on the western side of the Dead Scar.

The area known as the Ruins of Silvermoon makes up the western half of Silvermoon City, the capital city of the blood elves and the former kingdom of Quel'Thalas. It is split from the reconstructed eastern districts of Silvermoon City by the Dead Scar - the path taken by Arthas Menethil and the Scourge on their way to the Sunwell to resurrect the dead necromancer Kel'Thuzad. As they marched across Quel'Thalas at the bidding of the dreadlord Tichondrius, Arthas and his warriors corrupted everything in their path. The Scourge smashed through the Elfgates defending Silvermoon from attackers and decimated the Thalassian Ranger Corps, led by Sylvanas Windrunner, before finally reaching the Sunwell Plateau and placing Kel'Thuzad's rotting corpse into the magical waters of the Sunwell. Kel'Thuzad was resurrected as a powerful lich, whilst the well was forever corrupted.

Falconwing Square is the only populated area here and serves as an intermediary point for new blood elf players between Sunstrider Isle and Silvermoon City, much like Brill or Goldshire. It has an inn, mailbox, profession and class trainers.

Due to the large presence of house-like buildings, this may once have been the residential district of Silvermoon City before the coming of the Scourge. It would explain the large population of Wretched that haunt the ruined lanes as well as those blood elves wandering the streets of the blood elven capital, such as Rarthein.