The Runecarver is located in Torghast, Tower of the Damned. Using

The Runecarver was imprisoned in Torghast long ago and no longer remembers his life before he was a prisoner. His designs were extracted from him and used for the Mawsworn army. He was forced against his will by the Jailer to craft Frostmourne and the Helm of Domination, referred to by Zovaal as the "vessels of Domination".[1] Ve'nari believes that the Runecarver shouldn't be trusted.[2]

An image of the Runecarver left by the Primus

During the Chains of Domination campaign, after recovering the sigil of the Necrolords and bringing it to the Runecarver, it was revealed that the Runecarver was actually the Primus himself.[3] After defending against the Jailer's attack on the Runecarver's chamber, the Primus left an echo of his Runecarver form to aid other Maw Walkers and went to Korthia.[4]

After reaching max level, choosing a covenant, and completing the first chapter of the covenant campaign, players are directed to Torghast. There, they will discover a mysterious key that unlocks the way to the Runecarver. Once players manage to release one of the Runecarver's hands, players are granted the ability to craft Shadowlands legendaries. 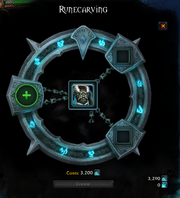 To craft a legendary, players will need a base item from one of the production professions (Tailoring, Leatherworking, Blacksmithing, or Jewelcrafting), two missives crafted with Inscription, Soul Ash, and a memory of the runecarver legendary recipe, which is unlocked by completing other objectives in the game (raids, PvP, mythic dungeons, etc).

Players who have Tailoring, Leatherworking, Blacksmithing, or Jewelcrafting as one of their primary professions will unlock the recipes for base items by playing max-level content. The crafted items are not soulbound, and can be traded or sold on the Auction House to other players.

Base items start at item level 190 and have four ranks, up to item level 235. Crafters can produce base items for all eight armor slots, as well as necklaces and rings. As players repeat crafts they will unlock higher ranks of the item, which require the same ingredients, but more of them.

Scribes create missives, which define which stats the final legendary will have. Two different missives are required to craft a legendary:

Completing Layers of Torghast, Tower of the Damned awards

[Soul Ash]. The first time a layer boss is defeated, it will drop Soul Ash. In an attempt to not force players to run trivial layers, they can skip ahead to higher unlocked layers and loot the Soul Ash from all lower layers. For instance, should a player start off at Layer 4 for their first kill, the layer boss will drop 375 Soul Ash. Players can earn up to 1140 Soul Ash a week by fully clearing (through layer 8) both available wings.

To upgrade legendaries to a higher rank, return with a higher-rank base item and the requisite amount of soul ash. For instance, to upgrade to rank 3 from rank 2, 1200 Soul Ash is required.

Memories of the Runecarver / Legendary powers

[60] The Weak Link, which awards the achievement

[The Forgotten One]. After that, players can then complete a specified objective in the game, usually killing a raid boss, completing a mythic dungeon run, or various PvP tasks.

The Adventure Guide lists all available powers and their sources.

General powers are usable for all classes and specs:

Do I know you? You don't look familiar...

If the adventurer has a crafting profession

You have the look of a... crafter?

If you possess the skills, I can impart my knowledge to you of how to create the vessels to hold the rune powers.