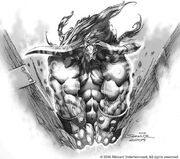 An Epic runemaster drawn by Samwise

Runemasters are masters of runes.[1]

Magnataur runemasters exist but it is a rare breed.[2]

As a playable class?

The runemaster was considered as a playable class in classic World of Warcraft but was scrapped early in development.[3] According to John Staats, runemasters were replaced by druids,[4] while according to Kevin Jordan they were replaced by warlocks in the role of a "freak class" that differed from standard RPG tropes.[5]

When the designers were discussing what the new hero class in Wrath of the Lich King would be, the runemaster was again brought up as a possibility. It was envisioned as a rogue- or monk-type melee class who wrote runes on their bodies to give them different physical powers. The runemaster was eventually merged into the death knight (along with the necromancer)[3][6] and later with the monk. 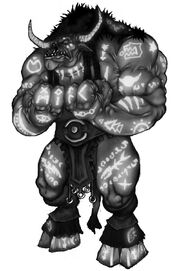 Runemaster as seen in More Magic and Mayhem.

Runemasters are monk-like arcane spellcaster and melee fighters who empower themselves with magical energies by inscribing runes onto their bodies. The runemaster is a free spirit, more at home in the wild than in the city.[7] The runemaster is a mystic who sees the power of ley lines. Moreover, those who study runes understand that these are not simply symbols of power - they are the power. The runemaster seeks to become one with the land, but not in the fashion of druids. Rather, the runemaster desires to become a microcosm of the land, seeking to overlay his body with runes in the same fashion that the land itself is overlaid with patterns of ley lines.[8]

He merges brute strength with arcane magic, covering his body with mystic tattoos and often imbuing them with magical energies to increase his skill in hand-to-hand combat. While a runemaster shuns armor, this is more to prevent hindrances to inscribing his runes than to demonstrate his subtlety and finesse with unarmed strikes. Quite to the contrary, a runemaster prefers to get in the face of his enemies. Using little trickery or subterfuge, the runemaster takes down foes with toe-to-toe, all-out assaults, hammering them with tattooed fists and feet brimming with arcane power. Runic magic is considered primitive yet complex by most other races. The dwarves have taken to it with deft skill, while the tauren study it more slowly.[9]

Runemasters fill many roles. They are adept melee combatants. They possess runes to enhance themselves and their allies, as well as to ward certain areas and otherwise make life difficult for their opponents.[10] The most experienced runemasters become epic runemasters. Others may be lone wolf runemasters.

The traditions of the runemasters date back to the ancient time of the titans, creators of runic magic. Their creation, the dwarves, quickly mastered the mysteries of the runes taught to them. However, as generations passed, the dwarves forgot their heritage and lost all knowledge of runes and their hereditary powers.

Tauren in Kalimdor rediscovered the power of runes. An ancient race as well, the tauren remembered the myths of runecasting and revived interest in this nearly lost art. The dwarves that came to Kalimdor with Jaina Proudmoore's Alliance Expedition learned tauren runecasting techniques. Tauren and dwarves do not share good relations, but they were eager to share knowledge of runes and titan myths.[9]

Most runemasters are heavily tattooed with runic patterns - not simply the unique ones that form the basis for rune families, but the so-called "simple runes" as well. Simple runes mimic patterns of ley energy that appear, again and again, in the environment. These patterns occur in nature and are responsible for things such as the strength of a given type of stone, the ferocity of a given windstorm and the coolness of a given stream; when a runemaster uses these patterns, he learns to channel his power into them at all times, attaining similar traits.[8]

Runemasters are proficient with simple weapons, but not with any type of armor or shield. Armor of any type interferes with a runemaster’s movements, which can cause his empowerments with somatic components to fail.

A runemaster can create any rune he knows at any time. He does not have to decide ahead of time which runes he will create, nor does he need to prepare anything in advance. To inscribe a rune, a runemaster must have a high intelligence.[12] The runemaster can sense the presence of runes in his vicinity,[13] a runemaster gains an intuitive sense that alerts him to danger from runes. A runemaster's marks can be made permanent.A creature can have only few magic tattoos. To replace a magic tattoo, the creature must first have an old one erased.[14] The runemaster bears simple runes (see below) on his knuckles. 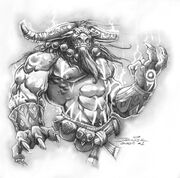 The runes that make up the runic patterns are powerful and unique, based upon patterns of ley-line energy found nowhere else in all of Azeroth. These are not the only such patterns in nature, however. There are patterns that are not unique, but are found over and over in certain dynamic situations in nature. These repeating patterns are the basis for simple runes: sets of runes that only runemasters may use.

A runemaster begins with a single simple rune. As his understanding of the runes grows, he can add others.

Runemasters may be found in either the Horde or the Alliance. Thought the arts of the runemaster originated among the ancient tauren, these techniques have been adopted by many races. After the tauren, dwarves are the most likely to practice the runemaster's art, with night elves, orcs and trolls making up a small population as well. Rare is the human runemaster, and dwarven mentors teach almost all of them. Many runemasters, particularly those whose studies of natural runic patterns take them away from the centers of civilization, end up taking a neutral stance.[8]