The Sanctum of Light, also known as Light's Hope Sanctum,[1] is a secret hall located beneath Light's Hope Chapel. It serves as the Order Hall for paladins. The Knights of the Silver Hand operate from here, led by the new Highlord. During the third invasion of the Burning Legion, the order includes members of the Argent Crusade, the Blood Knights, the Hand of Argus, the Sunwalkers and other paladin organizations.

The Sanctum is also a catacomb which houses the remains of a thousand heroes of Lordaeron. Many of the remains are those of warriors, priests, paladins, and champions of battles long past. They were exhumed from elsewhere and moved in secret to the chapel by members of the Argent Dawn, among them Lord Maxwell Tyrosus, so they could not be resurrected in the service of the Lich King.[2]

During the Fourth War, the status of the Sanctum is unknown following the split between its occupants during the Battle for Stromgarde, where Turalyon leads the Knights of the Silver Hand for the Alliance, and Lady Liadrin leads the Blood Knights and the Sunwalkers for the Horde.[3][4]

Following the armistice, Mathias Shaw mentions in his report that the Sanctum of Light is still active with Knights of the Silver Hand present inside. Its halls have also been cleared to store many artifacts mostly recovered from Scholomance, Stratholme and the Plaguelands. The artifacts stored by the Silver Hand are far too dangerous to be stored elsewhere, and above all far too tempting for anyone to resist, which requires sacred protections. Among them, the most dangerous artifacts are the weapons and armor recovered from the body of the dreadlord Balnazzar in the Scarlet Bastion, which are the

[Hammer of the Grand Crusader], the

[Crown of Tyranny], the

[Shroud of the Nathrezim], and the

Other artifacts recovered by adventurers, who ventured years ago in the burning city to defeat Baron Rivendare with the help of Lord Aurius Rivendare, have also joined those in the Sanctum, among them the

[Runeblade of Baron Rivendare], the

[Seal of Rivendare].[5] As a donation, the Sanctum archives also received the book

[The Light and How to Swing It], written by Uther for Arthas, from Lorekeeper Mykos who removed the Athenaeum mark, thus allowing all paladins to read it..[6] 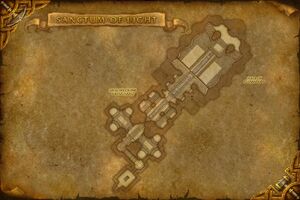 Map of the Sanctum of Light.

Hall of Champions - The main area of the Sanctum. It is a chapel where the Silver Hand makes ceremonies.

During the quest A United Force 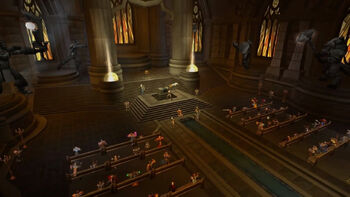 The Hall of Champions. 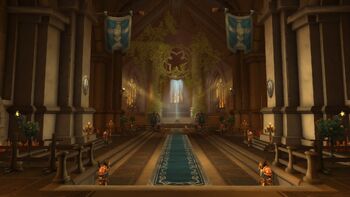 The Sanctum of Light.