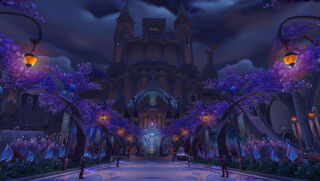 The Sanctum of Order

The Sanctum of Order is a large administrative building in the nightborne city of Suramar, located on the Terrace of Order and Grand Promenade. The building serves as headquarters for the Duskwatch, Suramar's primary peacekeeping force, although it has been known to serve other civil functions as well.

The Sanctum of Order, built upon two of the city's levels, houses several notable features. In the Sanctum's lower levels, there are numerous magically-sealed cells which are used to house individuals detained by the Duskwatch. Both the Arcway, a network of important tunnels below the city, and the Nighthold, the seat of Suramar's ruling powers, are accessible from the lower reaches of the Sanctum of Order, the Sanctum Depths. Situated in the west of the city, the building can be accessed from either the Grand Promenade or the Terrace of Order on the upper and lower terraces respectively.

The Sanctum is ornately furnished, incorporating iconic shal'dorei architecture into its design, and hosts a large number of Duskwatch forces and, as of Suramar's recent history, even demons.

As an insurrection against Grand Magistrix Elisande and her pact with the Burning Legion began to spread, the decision was made to recruit another member to the Grand Magistrix's council of advisers. Following a heated and competitive campaign, the influential nightborne aristocrat and covert rebel sympathizer Ly'leth Lunastre emerged with the support of the majority of Suramar's noble families. The ceremony to bestow the position upon Ly'leth took place within the Sanctum of Order's central chamber.

With the Grand Magistrix herself present, Ly'leth prepared to accept the title of advisor when her arch-rival for the position, Coryn Stelleris, entered suddenly and challenged Ly'leth to Tal'ashar—an honor duel, the winner claiming the title. Ly'leth chose to send a champion (a disguised member of the resistance) in her stead to duel Coryn atop the Sanctum of Order. Emerging victorious, the champion secured for Ly'leth the title, which she then claimed unopposed.[1]