Sand trolls[1][3][4] are a subgroup of jungle trolls that dwell in the Tanaris desert. The subgroup arose by adapting to the beating of the hot Tanaris sun after being separated from their Eastern Kingdoms brethren in the Great Sundering.[1][5]

A sand troll empire has never been formed - in fact the only known tribes of sand trolls are the Farraki (also known as the Sandfury) and Sandscalp tribes. Sand trolls mostly keep to themselves and attack all outsiders.[1]

Several thousand years prior to the War of the Ancients, the Sandfury tribe (then known as the Razorbranch tribe)[6][7] was originally part of the Gurubashi Empire. The Great Sundering split the jungle trolls' territory, which left the Sandfury in the middle of the desert of Tanaris.[1] The capital of the Sandfury is the troll city of Zul'Farrak, but they have few other remaining settlements - Tanaris has long since reclaimed them, leaving it dotted with buried ruins. The trolls have been forced to give up the majority of Tanaris to outsiders, and are thus fierce to defend what remains theirs.[8]

The Sandfury allied with the Twilight's Hammer shortly prior to the Cataclysm. Under the leadership of Hydromancer Kulratha, they attempted to summon Kai'ju Gahz'rilla for the Twilight cult. This alliance did not appear to last long after that.[9]

Zathra is a mercenary hired by the Hidden to track down the compass owned by Greydon Thorne, and later by his son Aramar Thorne. Chief Ukorz Sandscalp is revealed to still be alive.[10]

The Sandfury, now calling themselves the Farraki, allied with Zul's Zandalari trolls during their invasion of Pandaria. A large number of sand trolls can be found on the Isle of Thunder and inside the Throne of Thunder.

Once again referred to as the Sandfury, they can be found at Tal'farrak in Zuldazar.

General Jakra'zet is a sand troll on the Zanchuli Council, the leading council of the Zandalari. He earned his place after the Horde crushed his people to dust, and so he does not like the Horde.[11] 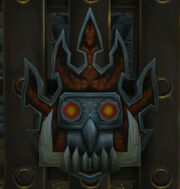 Icon of the Farraki tribe.

To survive the harsh desert lands the Farraki trolls learned the secrets of blood magic - drinking blood allowed them to access the darkest voodoo powers.[12] They also practice necromancy upon their own dead, allowing their ancestors to help the tribe survive in their harsh desert environment. When you need every troll you have to help out to get by, having one of them die is a big problem, which is why the Farraki learned to raise the dead with voodoo. Farraki zombies are imbued with the darkest of mojo.[13]

The powerful loa Bwonsamdi watches over the spirits of the Darkspear trolls, but many of the Farraki tribe's fallen members are offered no such protection after death. These tortured spirits obey Zum'rah, a cruel witch doctor who uses his dark magic to force the city's dead into unending service.[14]

Sand trolls are frequently cannibalistic, though not always.[15]

The sand trolls have worshiped a monstrous hydra called Gahz'rilla for thousands of years. Ever wary of the beast's icy wrath, the trolls will only rouse Gahz'rilla when they have plentiful sacrifices to sate the ravenous creature's appetite.[16] Within Zul'Farrak, the legendary hydra is a common motif in architecture and ornamentation.[17] The ornamentation modeled after the hydra demigod is Gahz'ridian (as coined by Marvon Rivetseeker).[18]

Like most other troll cultures, the sand trolls worship the loa: a complex pantheon of primal, often animalistic spirits and gods. It is unknown to what extent the sand trolls retain the Gurubashi pantheon, but they are known to worship at least three loa: Eraka no Kimbul, Ueetay no Mueh'zala and Elortha no Shadra.[19] 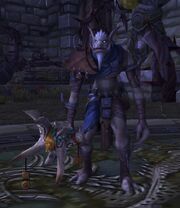 Sul the Sandcrawler, Farraki representative on the Council of Elders. 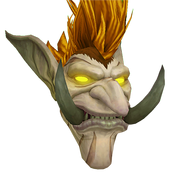 Sand trolls have coarse, cracked skin tending toward brown and gold colors,[1] (with some sand trolls being an orange-gold)[20] bearing only a rough resemblance to their jungle troll ancestors. Sand trolls also have thinner manes of hair than their brethren.[1] Sand troll females can be 6 feet tall.[21] Whether 6' is short, tall or average for a female is unknown. Unlike most other trolls, whose tusks are of an ivory (lighter, sometimes darker) color, the tusks of sand trolls vary between dark gray to black.

Sand trolls have brown and striking blue eyes. Sul the Sandcrawler has white or silvery eyes. Undead sand trolls instead have golden eyes.