For the 10 and 25-man versions of the raid boss introduced in Wrath of the Lich King, see Sapphiron (tactics). For his backstory and lore, see Sapphiron.

Sapphiron is the penultimate boss in Naxxramas. Previously an agent of the Blue dragonflight, Sapphiron was raised as a frost wyrm by Arthas Menethil to serve as the guardian of Kel'Thuzad's Chamber deep within the black citadel.

Sapphiron is located within the Frostwyrm Lair, which can only be accessed once players have defeated all 13 bosses within the four wings of the instance. Additionally, the encounter is designed to require sufficient frost resistance for all raid members, and should not be attempted otherwise.

Sapphiron has 3,164,450 health and is immune to frost spells and taunt.

Sapphiron takes to the air, knocking back all nearby players. This phase begins at 45 seconds and repeats every 67 seconds after Sapphiron lands, until he is reduced to 10% health and permanently grounded. Additionally, Chill and Frost Aura continue during this phase. 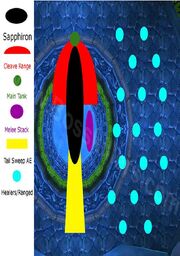 Sapphiron is a single-tank encounter, any additional tanks in the raid should instead dps. At least 12 healers are recommended, as well as enough mages and druids to decurse Life Drain without delay. Paladins or shaman are required due to their frost resistance buffs and should be prioritized to groups with the lowest amount of unbuffed frost resistance.

Frost Resistance is mandatory to survive Frost Aura. The recommended amount of frost resistance varies depending on the player's role and the raid's damage output, with a standard raid averaging ~150 frost resistance unbuffed. Healers should specifically avoid using too much frost resist gear as it will significantly reduce their bonus healing and mana regen and compromise their ability to keep the raid healed.