Sathrovarr the Corruptor is a dreadlord and part of the first boss encounter of the Sunwell Plateau raid. He has possessed the blue dragon Kalecgos, who fights players at Apex Point, above the Parhelion Plaza. While doing battle with Kalecgos, players will be transported to the Inner Veil, a shadowy realm where Kalec battles Sathrovarr in his half-elf form in an attempt to stave off his own corruption. Sathrovarr was defeated and Kalec rescued by the adventurers sent by the Shattered Sun Offensive.

Sathrovarr is one of the many demons summoned by Gul'dan in front of the Tomb of Sargeras to attack the forces of Azeroth in the climactic, disastrous battle at the Broken Shore.[1] 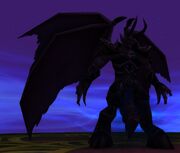 Sathrovarr within the Inner Veil in Sunwell Plateau.

Aggro
There will be no reprieve. My work here is nearly finished.

Berserk
I have toyed with you long enough!