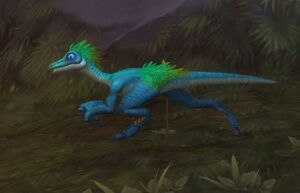 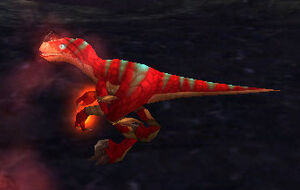 Saurid, formerly known as compies, are small, bipedal dinosaurs with a venomous bite native to Zandalar. The Zandalari trolls consider them to be vermin no better than rats, as they frequently gnaw at the trolls' food, poison their waters, hunt their children and eat their wounded. However, when the Zandalari renewed their alliance with the mogu, they brought saurid with them to the Isle of Thunder and began training them, proving that even the vermin of the Zandalari are a weapon in the trolls' arsenal.[1] Saurid have been known to kill both Kirin Tor Offensive and Sunreaver Onslaught soldiers by sneaking into their tents at night. The Zandalari raptors and saurid represented a substantial threat to their forces, and they were described as superb hunting beasts that can track prey over great distances and are often lethal to encounter when caught unawares.[2]

from Happy Holaua after completing

Due to their size and name, the Risen Anklebiters seem to be saurid.