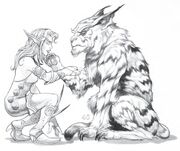 A male transformed savagekin and a female night elf from Alliance Player's Guide.

The most primal of druids, savagekin bear an ancient but obscure legacy. Whereas some druids seek to command nature or bond with it, the savagekin surrenders himself to the natural world, abandoning much of his humanity to live with the beasts. Those who adopt this role may find they pay a steep price for power.

Savagekin are druids who spend most of their time in animal form. They travel in packs with their fellow beasts. As animals they gain strength and finesse, but come close to becoming irreversibly feral. Savagekin constantly battle the inner beasts that threaten to consume them, clinging to their last vestiges of sentience.

Half-elves, who straddle the world between human and elf, and night elves are the most common savagekin, though hermitic humans who wish to be closer to the animal world occasionally adopt this class. Most people think of savagekin only as "druids who've gone feral." Savagekin hate species that practice cruelty toward animals (particularly ogres, though some humans and orcs qualify), and usually adventure solely to hunt them down and kill them.